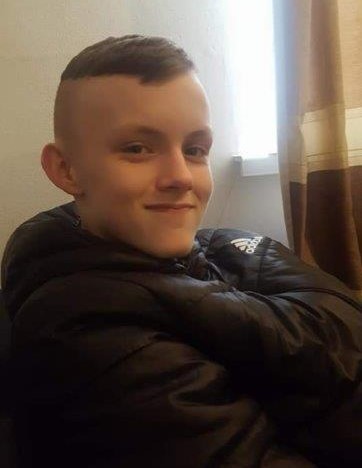 Nine teenagers have been re-arrested on suspicion of murder as the investigation into the death of Kennie Carter ‘gathers pace’.

16-year-old Kennie was stabbed in the chest in Stretford in January, and died shortly afterwards in hospital.

The fatal stabbing, which police say sent ‘shockwaves through the community’, took place on Thirlmere Avenue just before 7pm on Saturday 22 January.

Kennie was described by his family as being a ‘cheeky chappy’ whose death left a ‘massive hole’ in their lives.

Police have announced today that nine teenagers, aged between 13 and 17, were re-arrested on 14 June on suspicion of murder.

Eight have been re-bailed while one remains in custody.

Kennie’s family are being kept updated on the investigation and supported by specialist officers.

Their tribute to their son said: “Kennie was our youngest , our baby, our cheeky chappy with baby blue eyes. His death has left a massive hole in our lives and our family has been destroyed. We will never have the opportunity to see him growing up and having a family of his own.

“Each day when we wake the house feels empty; we can’t hear his footsteps, his voice or his music. We cannot believe how generous people have been, even people that don’t know us or Kennie directly.

“We want to ask the community to provide as much information as they can to the police so that the person responsible is brought to justice. Young lives like Kennie’s are being lost far too often and this has to stop.”

The Major Incident Team have spoken to over 50 people, collated in excess of 100 hours of CCTV and executed over a dozen warrants.

Detective Chief Inspector Alicia Smith, from GMP’s Major Incident Team, said: “Kennie’s death sent shockwaves through the community and has left a family still trying to come to terms with their loss of their loved one.

“Kennie was just 16 and had his whole life ahead of him and ever since that evening, our investigation has continued. Yesterday’s arrests are all part of our continued work to get the Kennie’s family the answers they desperately need.

“Details can be passed anonymously to the independent charity Crimestoppers on 0800 555 111.”