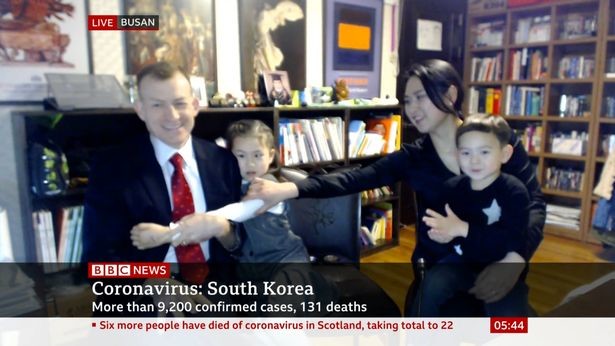 With millions of Brits working from home for the foreseeable future, it's inevitable we'll see some live stream faux-pas appearing online in the next few weeks.

But no video call will ever be quite as disastrous as the one involving Robert Kelly in 2017.

The Professor of Political Science was broadcasting live from his home to discuss the impeachment of South Korea’s president, and was left chuckling in embarrassment when his daughter Marion barged in to gatecrash his big moment with BBC

But that was only the beginning. Seconds later, Marion's baby brother James tottered through in tow.

Robert's wife Jung-a Kim scrambled the children out of the room as fast as she could so the conversation could resume.

But by then it was too late. The video was already being gleefully shared across the web.

The most famous working from home family on the planet are now live on BBC World pic.twitter.com/T9vGrKu8tJ

It was one of the funniest, charming, popular videos of the year - being streamed more than 36 million times - and viewers were delighted to see the viral family back on television screens this morning.

According to Robert, though, working at home is just as challenging now as it was back then.

"They've got nothing to do they're climbing the walls. It's really tough."

Jung-a Kim said: "It's very difficult to stay in the house for a very long time.

"We try to go out and see the flowers and the trees and they can shout and scream."

The family are based in Busan, South Korea - another country which initially posted high numbers of infections during the early outbreak of COVID-19.

Cases have slowed considerably over the past two weeks, however, with rapid, widespread testing playing a key role in preventing the spread of the virus.