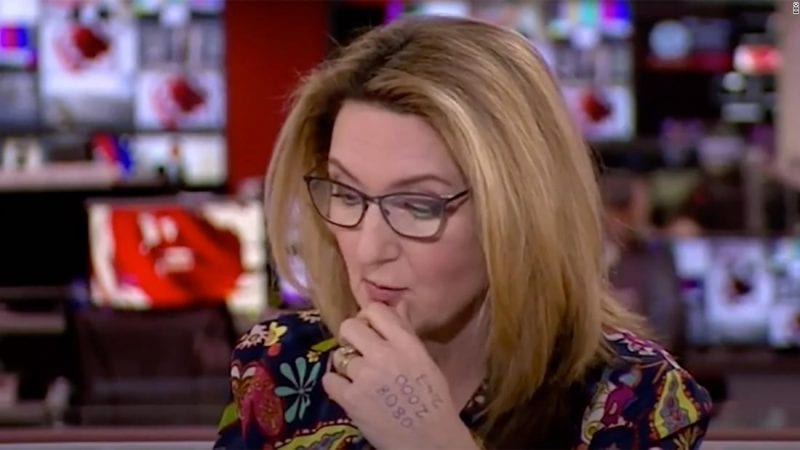 It didn't go unnoticed by the British public and now it's been revealed why she chose to do so.

Those tuned in to watch BBC News at 9am yesterday morning will have seen broadcaster Victoria Derbyshire present the show with a phone number written on her hand.

That number was for the National Domestic Abuse Helpline.

After the number of calls and online requests to the helpline has risen by 25% in the last week during UK lockdown amid the coronavirus (COVID-19) pandemic, Derbyshire took to social media to confirm why it is that she chose to do this.

Accompanied by a black and white photo of her hand, she shared a poignant message on Twitter yesterday that read: "The National Domestic Abuse hotline has seen a 25% increase in calls & online requests for help in past week".

"During the lockdown there’s also been a daily rise in people going on the helpline website & last wk that figure was up by 150%".

The helpline is open 24/7 pic.twitter.com/onHBSfhERV

Speaking to The Independent to offer further clarity on her decision to write the number on her hand at this time, Derbyshire said: "some people will be trapped with a violent perpetrator in self-isolation or partial lockdown and it’s even more vital to get the helpline number out there so people know there is someone right now available to take your call and help you if you are in a violent or threatening situation".

“I’d written the number on my hand to tweet a photo of it at 7am this morning and left it on my skin deliberately in case it could help any of the millions watching after 9am on BBC 1".

Since broadcasting, the gesture has received an overwhelming amount of support from the British public on social media.

One particular tweet, by former Labour leader Jeremy Corbyn's son Tommy, not only supported the act, but also added another powerful message by stating: "Being in lockdown is bad enough, now imagine doing it with someone who terrifies you".

Huge respect to @vicderbyshire, the number on her hand is for a domestic abuse helpline.

Being in lockdown is bad enough, now imagine doing it with someone who terrifies you.

For anyone who needs it - National Domestic Abuse Helpline: 0808-2000-247 pic.twitter.com/YFe0iqurpm

The supporting message struck an emotional chord with a lot of people and has also gone viral.

Inspired by her gesture, others on social media have praised Victoria Derbyshire for her courage and some have even been inspired to take a leaf from her book and do the same in a bid to spread the important message.

Victoria Derbyshire is a class act. She’s been one of the most stellar TV journalists for a while, and here she is yesterday hosting a BBC News segment with the National Domestic Abuse Helpline written on her hand, amongst a spike in reports of domestic abuse in lockdown ♥️ https://t.co/Mf2OUEkxgx

Huge props to our @vicderbyshire ?

Just saw that @vicderbyshire presented BBC News with the National Domestic Abuse helpline number on her hand. Such a powerful gesture and one I hope may have saved some lives.

Let’s get this number out there. Let’s save lives. Are you scared of your partner? Does he coerce you into sex? Does he stare you out until you cook his dinner? Does he open your post & refuse to give it to you? Call this number please. @vicderbyshire thanks for the inspiration. pic.twitter.com/RElEPwapdm

For those who should need it, the number for the National Domestic Abuse Helpline is 0808 2000 247 and as previously mentioned, this service is available 24/7.