"I’ve always tried to set the example myself for the youngsters that grew in all the teams that I’ve represented... unfortunately, that’s not always possible." 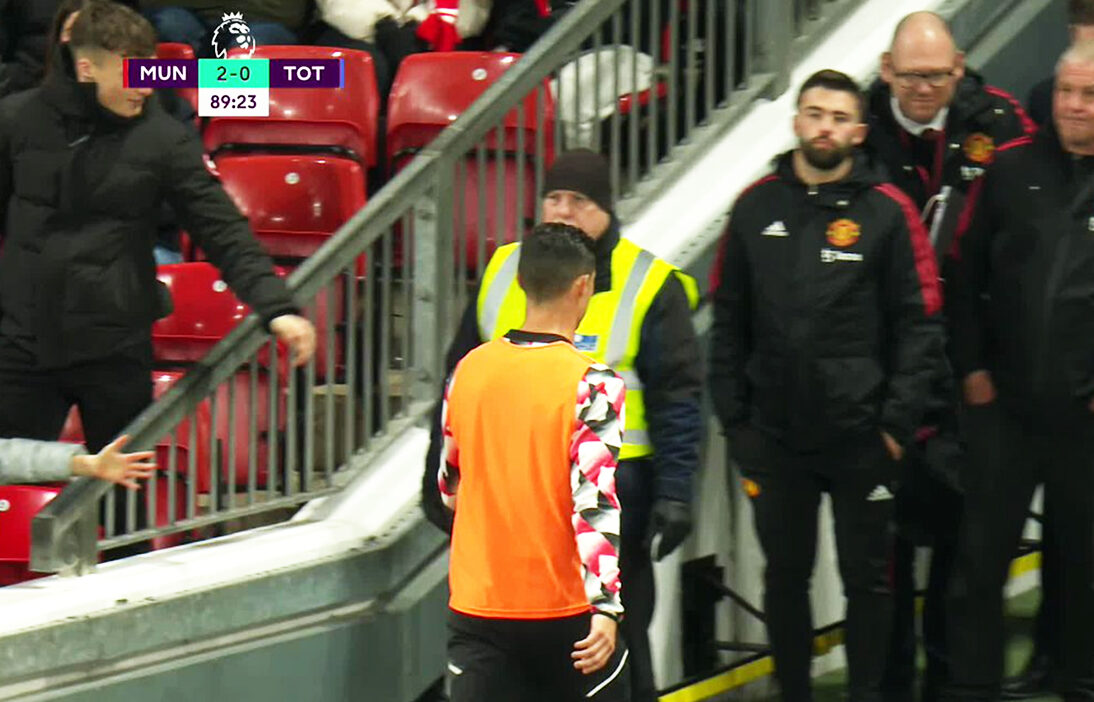 Cristiano Ronaldo has spoken out to address the moment he was seen storming off down the tunnel before the end of Manchester United‘s win over Tottenham earlier this week.

The red half of Manchester may be sitting in a somewhat respectable fifth place on the Premier League table at the time of writing, but the team’s impressive 2-0 win over high-flying Spurs on Wednesday night was still undoubtedly a relief for Red Devils’ fans watching on the night after a recent mixed run of matches.

The joyous occasion was, however, a bit marred for some fans by the fact star striker Ronaldo took the decision to head on down the tunnel before the game had even finished.

The Reds were already cruising home to victory thanks to goals from Fred and Bruno Fernandes.

But the 37-year-old striker appeared unhappy at his lack of playing time during the match, and while he should have been ready to welcome the rest of his teammates back into the dressing room after their convincing victory, he instead chose to get up from the bench and head for the Old Trafford exit in the 89th minute.

Speaking after the match on Wednesday, manager Erik ten Hag said he would “deal with [Ronaldo] tomorrow” and that his focus for the time being was on celebrating the big win and recovering for their next game this Saturday.

Now, after much fan chatter and speculation about why he chose to exit the pitch early, the Portuguese player has taken to social media to speak out on the matter.

Addressing the situation in a post to Instagram, Ronaldo said: “As I’ve always done throughout my career, I try to live and play respectfully towards my colleagues, my adversaries and my coaches. That hasn’t changed. I haven’t changed. I’m the same person and the same professional that I’ve been for the last 20 years playing elite football, and respect has always played a very important role in my decision making process.

“I started very young, the older and most experienced players examples were always very important to me. Therefore, later on, I’ve always tried to set the example myself for the youngsters that grew in all the teams that I’ve represented.

“Unfortunately that’s not always possible and sometimes the heat of the moment gets the best of us.

“Right now, I just feel that I have to keep working hard in Carrington, support my teammates and be ready for everything in any given game.

“Giving in to the pressure is not an option. It never was. This is Manchester United, and united we must stand.

“Soon we’ll be together again.”

Since ten Hag was appointed manager of Manchester United, footballing veteran and all-time world-leading goalscorer Ronaldo has enjoyed significantly less time on the pitch than he is used to, and while he has scored a couple of goals in the minutes he has played, the feeling is that his contribution to the team’s wider performance is waning.

This isn’t the first time he’s thrown a bit of a strop over being left on the bench this season either, and his attitude towards his lack of minutes has lead to fans and media alike branding his behaviour “childish”, “embarrassing” and “incredibly disrespectful”.

Some even went so far as to call it “an absolute disgrace“.

Following the early tunnel exit incident, Manchester United has confirmed that Cristiano Ronaldo will not be including in the squad to face Chelsea in the Premier League this weekend.