Care home staff say the wonderful donations "brought a tear to the eye". 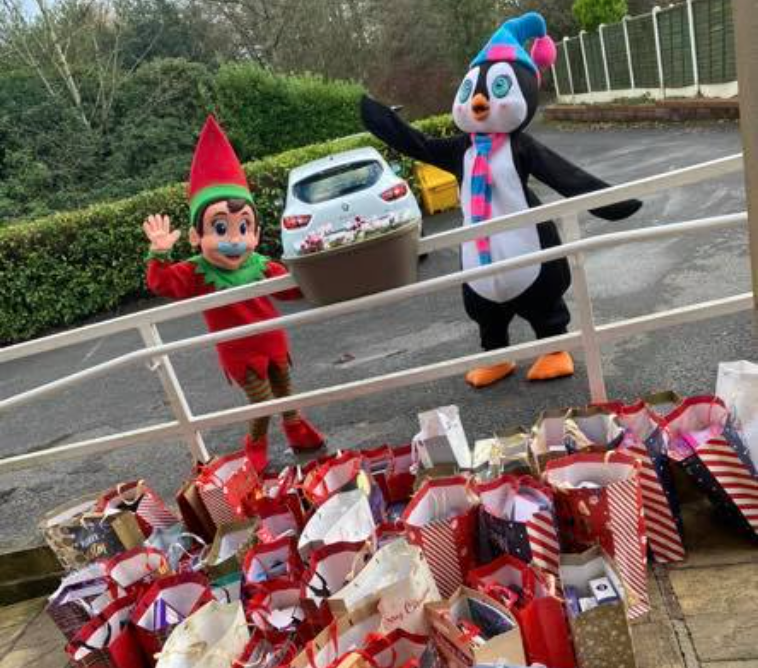 A local community in Rochdale has come together to donate hundreds of gift boxes to residents in the borough’s care homes ahead of the festive period.

The project is the brainchild of Heywood resident Richenda Mather and her 14-year-old son Ady.

Richenda – who works with her daughter as a hairdresser and was forced to temporarily close her business due to the second national lockdown – launched the heartfelt idea with a social media post earlier this month, and it has since resulted in thousands of pounds being raised, as well as almost 200 festive gift bags being distributed to care home residents, many of whom haven’t seen their families in months.

The pair said the festive gifts would simply cheer the care home residents up, and it doesn’t have to cost much to “make someone very happy”.

In true Greater Manchester spirit, the local community quickly rallied around the idea, and people were soon dropping gifts off at Richenda’s house, sending her money toward putting gift bags together, and one of her friends – who works as a train driver for Northern Rail – even managed to raise an impressive £1,000 in just 24 hours for the initiative.

Each bag contained a variety of pick-me-ups including chocolates, sweets, scarves, blankets and perfumes.

Richenda also asked a group of childminders if they would consider asking children to make homemade Christmas cards too and in total, the mother and son duo managed to pack around 180 gift bags, which they successfully delivered to four local care homes last week.

Speaking to the MEN on the initiative, Richenda said: “We saw something on telly where there was a nursing home and nobody had seen their family since March [and] my son said, ‘why don’t we do some Christmas gift boxes for these people?’

“So we went and made one and I asked on Facebook whether anyone else wanted to get involved and it just went absolutely mad.”

Care homes to benefit from Richenda and Ady’s festive gifting project include Springfield Park Nursing Home, Springbank Nursing Home, Beech House, and Tudor Court, with staff sending their thanks for brightening the residents’ days and saying the community coming together in such a way to provide the donations “brought a tear to the eye”.

If that wasn’t incredible enough as it is, the pair even borrowed elf and penguin outfits to dress up in when dropping the gifts off, waving at residents through the window.

“I got a message from the nursing home and they said they are going to go out and buy an elf outfit for the residents as they loved it so much,” Richenda added.

Expressing his gratitude to the community for supporting residents, Michael Jones – Manager at Springfield Park Nursing Home – said: “I wanted to say thank you so much to her and her friends and colleagues who have donated to our residents at such a difficult time.

“They are missing out on family and friends visiting and this will be such a great boost for them. It was a massive surprise [and] we weren’t expecting it at all.

“It has put a smile on their faces.

“There are handmade cards from children in the local area too – they are so heartwarming [and] it brings a tear to the eye. It’s amazing to know that they are not forgotten and that people are thinking about them at this time.”

It wasn’t just festive gift bags and boxes donated though.

Enough money was even raised to be able to buy a tablet device for one home, so that residents could stay connected with their families, and staff at the homes also had a surprise too as Richenda said: “At the end of it all, I think we had about £50 left, so we got the staff a bottle of vodka each and some chocolate and thank you cards, as we thought we can’t leave them out,”

After all their hard work, Richenda and Ady have said they would like to send their thanks to anyone who has donated to the successful initiative. She said: “It wasn’t just me who’s been doing this – everyone in Heywood has been contributing,

“One woman dropped six gift bags off – it really has been madness.”

“It was so worth doing – it was a stressful week but we managed to do it all… I’d like to say a big thank you to everyone [as] I couldn’t have done it without everyone else.”

She continued: “Usually this is my biggest time of the year, so I don’t know if I’d have been able to do it otherwise, but I am thinking about trying it again next year as I have really enjoyed it,

“But with a bit more help dropping them off.”

From everyone here at The Manc, to Richenda, Ady and the local Heywood community who played a crucial part in contributing at a time when it is truly needed most, we take our hats off to you.

Thank you for helping to keep Greater Manchester great.