Finishing touches are being made to transform the giant 330-metre Grade II-listed steel viaduct into an elevated park. 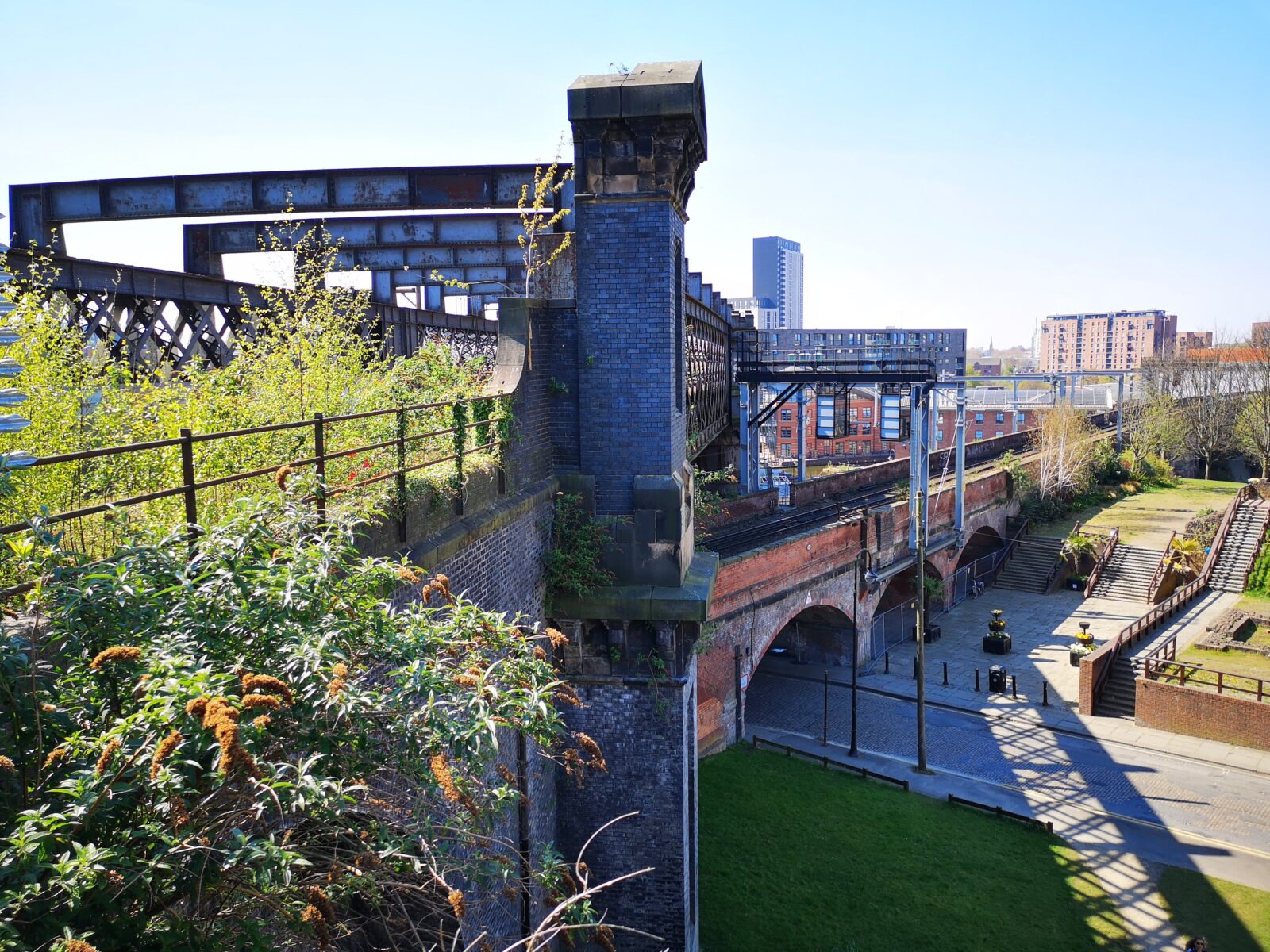 After the National Trust announced its ambitious vision to create an urban green space in the heart of the city centre by tackling the challenge of “greening” the Grade II-listed Castlefield Viaduct and celebrate the history of this well-known landmark, it has now been revealed that visitors will be able to enjoy the park from next weekend.

Construction company MC Construction, Twelve Architects, and four local partners have been working with gardening specialists and apprentices at the National Trust to create the new park – with thousands of plants, shrubs, and trees having been planted over the past five months.

Now, less than half a year after work began to transform the giant 330-metre steel viaduct into an elevated park, the finishing touches are being made.

The temporary urban park at Castlefield Viaduct will open to the public on Saturday 30 July.

The park will be or the next 12 months, with green spaces stretching across the elevation, and during this time, visitors will have the opportunity to explore part of the structure and find out more about the viaduct’s heritage, the city’s long relationship with plants and trees, and learn urban gardening tips.

You’ll also get to experience a variety of planting displays as you walk along the viaduct while enjoying the elevated setting above the historic cobbled streets, according to the National Trust, and see the park “develop, evolve, and respond” with the changing seasons.

The plans for Castlefield Viaduct are part of the National Trust’s work to “increase access” for everyone to nature, history and beauty in, around, and near urban areas.

The Castlefield Viaduct dates back to 1892 and was built by Heenan and Froude – the same engineers who worked on Blackpool Tower – but the site closed in the late 1960s, and before the National Trust took over and began to add over 3,000 plants, shrubs, trees, and more, it had sadly been left derelict.

The industrial heritage of Castlefield has been reflected through all elements of the design of the park.

The National Trust says the design of the planters at the new park gives “a subtle nod” to the industrial architecture of the viaduct, and mirrors the curve of the railway tracks that once transported goods across the structure to the Great Northern Warehouse.

A section of the viaduct has also been left untouched to “provide a sense of how nature has reclaimed the space” since the site closed.

Speaking ahead of the park officially opening to the public next Saturday, Andy Jasper – National Head of Gardens & Parklands at the National Trust – said: “Creating a garden on an industrial heritage structure such as this is new territory for us and we have created a test bed that represents how the park in the sky might be, if the people of Manchester want it.

“With more than 3,000 individual plants planted in completely peat free growing media over the past couple of months, we’ve been literally trialling new planting techniques as we go – working with limited growing depths and thinking about how these plants will deal with the more challenging conditions of being 17 metres in the air.

“I cannot wait to see what people say, and I am intrigued to see how the plant life will take in its new surroundings.”

Duncan Laird – Head of Urban Places at the National Trust – added: “This has been an intensely busy few months as we prepared to open the doors of the pilot project, and we are incredibly excited to finally be able to open this space for people to visit for the first time in over 50 years.

“As the trees and plants start to bed in and grow it will slowly begin to match the vision for this space, and we will be keenly listening to visitor feedback that we will use to shape the ongoing evolution of the viaduct.

“We’re at the start of the journey – not the end.”

100 people a day will be able to visit the Castlefield Viaduct from Saturday 30 July.

Entry onto the structure will be free, but a booking system will be in place to help manage numbers, and as part of the experience, visitors will be able to join guided walks – with plans to host various community events, workshops, and consultations in the pipeline.