Salford Foodbank has distributed a record number of food parcels throughout the coronavirus (COVID-19) pandemic. 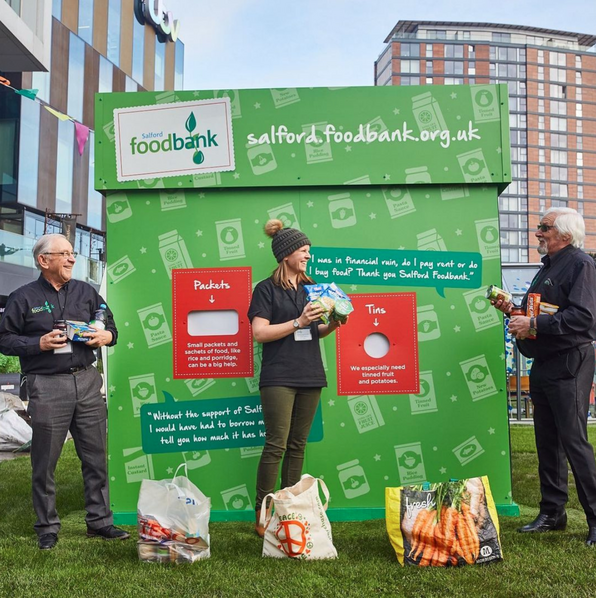 With less than a week to go before Christmas, Salford Foodbank has set itself a rather unique donations target this year.

Salford Foodbank – part of the Freedom Central Manchester charity, and supported by local churches and the community to “work together towards stopping hunger in the local area” – is aiming to raise a whopping 1.5 tonnes of food donations for families in need across the region.

If you need something to put that into perspective, that’s the equivalent in weight of three whole camels.

And thanks to the kindness of local residents – including Keith Walker from Boothstown, who collected a staggering 600kg of donations from generous neighbours, friends and family – the foodbank has now already received over 1000kg of donations – or almost two camels.

Salford Foodbank – which is also part of The Trussell Trust’s network of more than 1,200 foodbank centres working to tackle food poverty and hunger across the UK – has distributed a record number of food parcels throughout the coronavirus (COVID-19) pandemic.

However, with demand set to increase over Christmas and into the new year, they have vowed to keep the momentum going and reach the target.

In a bid to help with this mission, MediaCityUK-based design agency Carbon Creative has transformed a deluxe shed at the popular Box on the Docks open-air gallery and immersive art trail into a striking ‘Salford Foodbank Giftbox’ collection point.

Visitors to the trail and passers-by are being asked to drop off an item such as instant coffee, boil-in-a-bag rice and pasta, jars of jam and sauces, seasonal chocolate boxes, and toilet roll.

If you are not able to visit MediaCityUK though, but still wish to help Salford Foodbank “over the hump” of its donation goal, several community donation points have also been set up across Salford to support the campaign, including Moorside High School.

The ‘mini’ food giftbox locations are clearly marked its website, and is also filled with information, updated lists of items Salford Foodbank needs, and ways you can get involved.

Mr Mills said: “As soon as we mentioned the appeal our students, their families and staff were eager to help.

“We had planned to use crates but had so many donations we had to borrow wheelie bins from Salford City Council to hold them all. I’m overwhelmed by their kindness, generosity and determination to make Christmas that little bit easier for people in need this year.

“We place great importance on community spirit as a school and they have done themselves and Salford proud.”

Iain Wight from Salford Foodbank added: “This year has seen an outpouring of local generosity, with communities coming together, such as Moorside School, MediaCityUK and through people like Keith who want to play their part in helping to support those who may be struggling.

“We have been blown away by people’s kindness and we can’t thank everyone enough – it means we can support even more families through unprecedented times of hardship.”

You can find more information about donations via the Salford Foodbank website here.