Taking a space inside a restored Victorian warehouse, Madre will count Cloudwater, Pollen and Nell’s amongst its neighbours 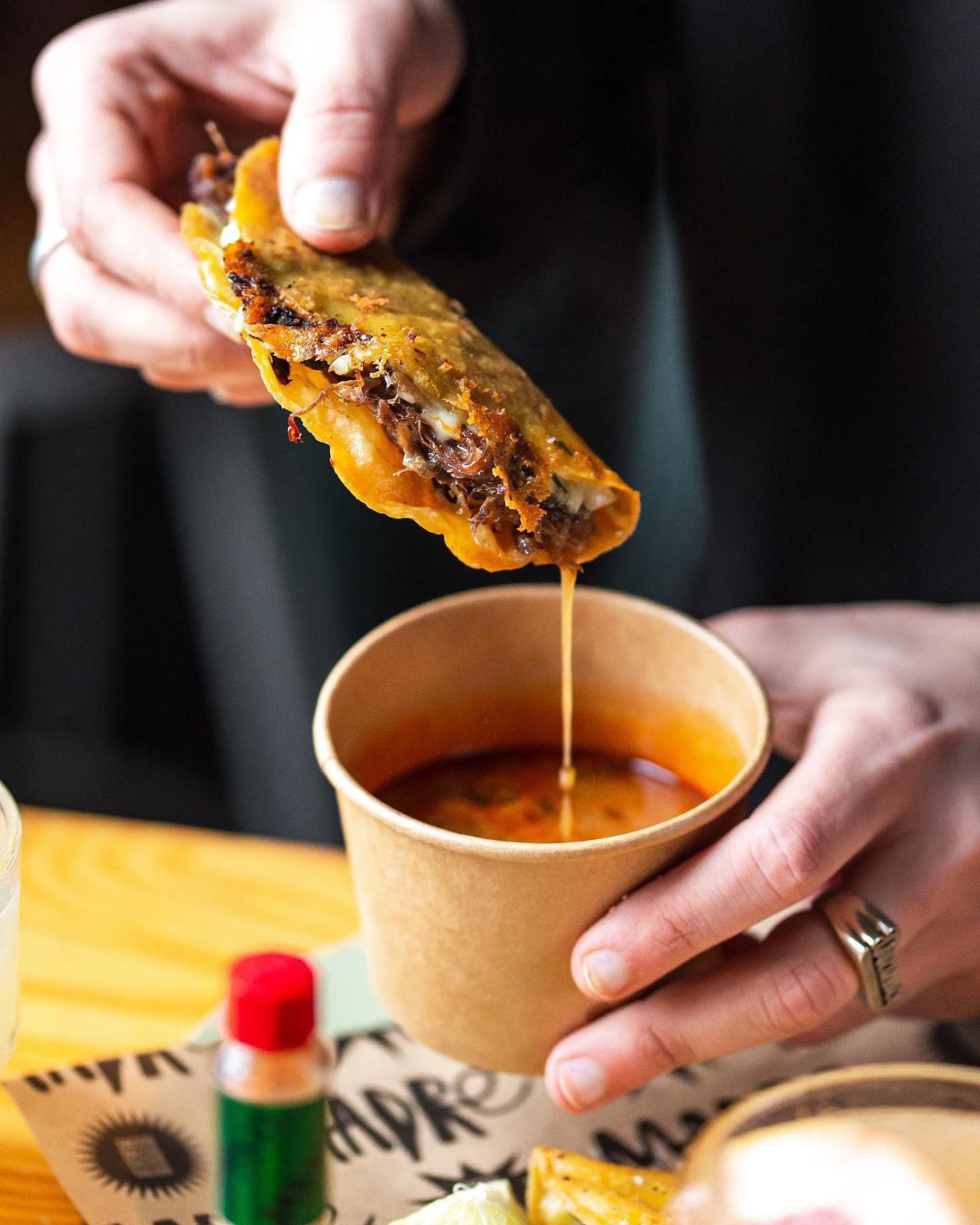 A new Mexican restaurant specialising in tacos, ceviche, mezcal and tequila cocktails is opening in Manchester.

Called Madre, it’s born out of a collaboration between the founders of London’s popular Breddos Tacos and the team behind Liverpool favourites Belzan and Filter + Fox, with a menu that features birria-style tacos dunked in gravy (well consomme, but this is Manchester so we’re calling it gravy).

Foodies who’ve spent any time at Escape To Freight Island will likely already know the brand and its excellent tacos from its residency there. Those who don’t are in for a treat.

Now, owners are moving on up – taking on bigger premises of their own as they venture out to open their first full bar and restaurant in Manchester for the first time.

A proper mezcaleria and taqueria, it’s not going to be all hangover gravy tacos here – there will be some fresher, zesty dishes to get stuck into too.

As for drinks, think a solid margarita menu, mezcal cocktails like palomas and mezcal coladas, alongside red and rose sangria, a full wine list, bottled and draught beers and a decent selection of softs.

Inspired by the foodie culture of Mexico City, the new restaurant will also put a focus on ceviche – offering a selection of super fresh, zesty plates of the Peruvian raw citrus-cured fish favourite when Madre opens its doors later this year.

Foodies who’ve spent any time at Escape To Freight Island will likely already know the brand and its excellent tacos from its residency there. The new Manchester restaurant follows on from the success of the first Madre joint, opened in 2019 at Liverpool’s Albert Dock.

Now, owners are moving on up – taking on bigger premises of their own as they venture out to open their first full bar and restaurant in Manchester.

Located at garden rental neighbourhood Kampus, which borders the city’s famous Canal Street, the restaurant is pipped to open sometime this spring.

Madre at Kampus will open daily from 11am til late, evolving from a lunch spot and family-friendly destination to a buzzing bar with Mexican party vibes as the sun goes down.

Visitors can expect an interior inspired by the adobe houses of South America, with earthy, organic tones promising to create an intimate and warm space.

Taking over a space in Minshull House, the restored Victorian warehouse, Madre will count brands including Cloudwater Brewery, Pollen bakery and Nell’s pizzeria amongst its neighbours.

Speaking on the new opening Chris Edwards, co-founder of Madre, said: “Madre is perfect for a party city like Manchester. Taquerias can be pretty raucous, social spaces but at the same time have a family feel, where people come together to share amazing food.

“We’ll be bringing that vibe to Kampus, with iconic favourites alongside a drinks menu stacked with margaritas, natural wine and local beer. Madre de-mystifies traditional Mexican food, serving up new plates made with top quality local produce and a love for authentic flavours.

“We knew we had to be part of Kampus, we love the heritage building and we’ll be in top company with the other independents signed up.”

Manchester will be treated to a packed spring and summer as the neighbourhood comes to life, with pop-up events, exhibitions and operators opening their doors this year.

Adam Brady, of HBD, said: “Madre’s whole ethos is about social dining, an inviting space where friends and families can share stories as well as delicious food. They’re a perfect match for our growing family of independents.

“With more people calling Kampus home and a stacked summer of events and openings, 2022 is already looking like an epic year for the neighbourhood.”