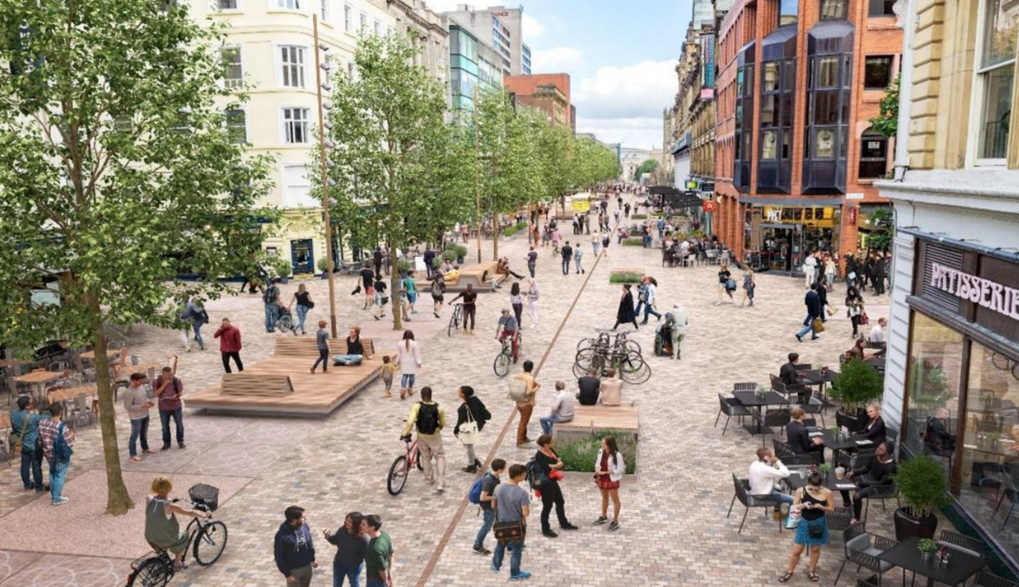 Manchester City Council has offered Mancunians a first look at what Deansgate could potentially look like if fully pedestrianised in the future.

The strategy – which was published yesterday and was developed jointly by Manchester City Council, Salford City Council and Transport for Greater Manchester – outlines how the city centre’s streets can be best managed, with the goals of further improving the city’s public transport network, making walking the predominant mode of travel within the city centre and reducing dependency on car journeys.

It is also aligned with wider efforts across the city region to develop strong and sustainable recovery strategies in the wake of the coronavirus (COVID-19) pandemic.

According to the local authorities, the strategy’s central aim is for 90% of all trips into the city centre to be made on foot, by cycle or using public transport before 2040, which will “help to reduce air pollution and contribute to Manchester’s ambitious goal of becoming a zero-carbon city by 2038 at the latest.”

A key part of the proposal is to formalise the current trial which has removed traffic along Deansgate to make it a more attractive street for people on foot.

As part of the the plans to expand the city’s current pedestrian priority zones, enhance walking routes, and make it easier to cross the streets, Manchester City Council is therefore “planning for further street improvements on the rest of Deansgate and Whitworth Street to make these key streets better for walking, cycling and spending time in through significantly reduced traffic.”

Deansgate is described as a “priority location” for delivering the council’s Streets For All approach and is intended to be a key destination place within the city centre in the future.

What does this mean though?

Well, Manchester City Council has stated that: “This means creating the highest quality public space, whilst recognising the role this street plays in moving people between locations, especially by walking and cycling. Accordingly, we want to create high quality public realm by giving more space to pedestrians and also improving the junctions to make it easier for people to cross the road.

“At the same time, we want to retain people’s ability to move to move along this street, particularly on foot and by bike, encouraging general traffic to use alternative routes, such as the MSIRR.”

Speaking on the release of the Manchester City Centre Transport Strategy 2020 Councillor Angeliki Stogia – Manchester City Council’s Executive Member for the Environment, Planning and Transport – said: “As Manchester continues on the road to recovery from the pandemic and plans for growing numbers of city centre jobs and homes, more than ever, a strategy is required to guide the future of transport in the region’s capital.

“This ambitious strategy envisions a well-connected, zero-carbon city centre at the heart of the North, offering residents, workers and visitors a great place to live, work and visit.

“It reflects the thousands of voices – including residents, commuters, and business and interest groups – who’ve contributed to years of discussion and consultation about how they want to travel into and around the city centre.

“What’s emerged is a strategy that reflects the strongest calls – for more and better space for pedestrians and bikes, more sustainable travel options that keep the air clean and cut carbon, less congestion, improvements in public transport, parking and deliveries that don’t choke our streets and air, plus smart use of new technology to help make all of this happen.

“We’re excited to invite everyone to get on board and have their say on this bold, environment-enhancing strategy for a cleaner, sustainable, inclusive Manchester.”

The consultation is designed to give the public their chance to have their say on the plan and is open until Wednesday 4th November, so if you’d like to contribute your thoughts on the proposals, you can do so via the Manchester City Council website here.