The controversial Kate & Luc Cafe Restaurant has had its licence stripped after showing "flagrant disregard" for public health. 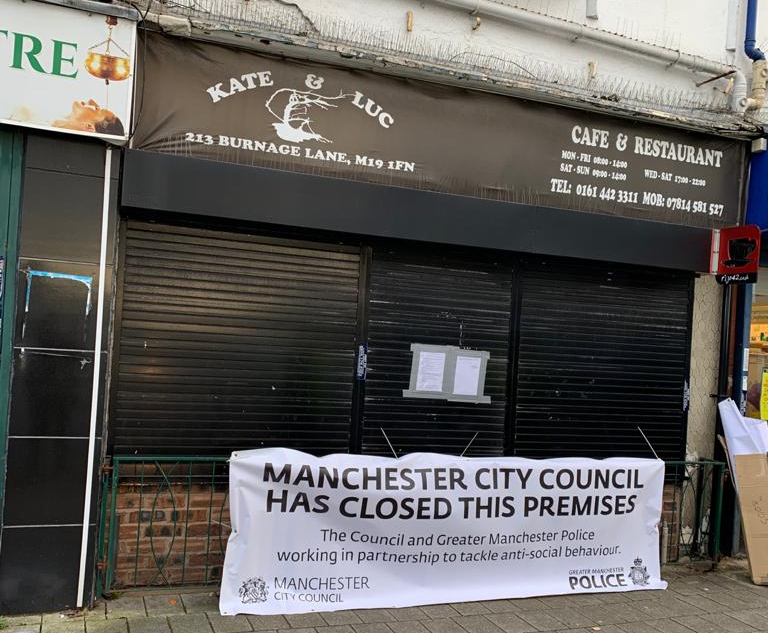 It has been confirmed that a Burnage cafe at the centre of a widely-reported police investigation following a scuffle between an officer and the venue owner has officially been stripped of its licence.

It comes after a Closure Order for Kate & Luc Cafe Restaurant was issued at Manchester Magistrates’ Court last month, with the cafe described as “the source of frequent complaints from the public to Manchester City Council and Greater Manchester Police over failures to follow COVID-19 restrictions”.

The owners were then told to close the premised until 9th May and pay legal costs of £3,586.52.

At the time, Manchester City Council said that breaches at the cafe dated back to November 2020, with staff previously refusing to wear masks or put up protective screens and making “no effort” to enforce social distancing.

Two separate Fixed Penalty Notices were issued in early February, along with a Premises Closure Warning, but the cafe continued to operate.

The cafe has officially been closed down after the “disorder” on 6th February.

The licensee refused to accept that he was breaking the rules, the hearing was told.

Mr Domanski told the hearing that he had suffered a mental health breakdown as he struggled to apply for financial support for his business during the coronavirus (COVID-19) pandemic, but the council’s licensing subcommittee described his behaviour as “appalling” and PC Alan Isherwood – of Greater Manchester Police’s licensing team – said it was “clear that Mr Domanski is unfit to hold the licence”.

A representative of Mr Domanski said he had been diagnosed with a mental health disorder and that the enforcement visits had caused him distress, “impeded his actions” and provoked a “fight or flight response”.

Mr Domanski said: “We tried hard with all the restrictions, we lost 85 to 90% of income. We just couldn’t do it and I gave up. I had no choice, that was my feeling.

“I’ve got a problem with depression for nine to 10 years, I’ve been on and off medicines. It’s too much stress for me.”

Mr Domanski admitted to the hearing that he had broken COVID regulations, but that he did so while “under duress”, and asked the committee to give him the chance to open in a COVID-secure way, however the hearing panel agreed to revoke the licence, meaning that the business will no longer have permission to trade.

The hearing panel said in a statement: “The reasons for revocation are the flagrant disregard by the premises holder for COVID regulations.

“The committee are absolutely appalled at how the premises licence holder treated the officers, and they have no confidence that the licensing objectives will be upheld due to the actions taken by the premise silence holder during this pandemic.

“A measured approach was taken by GMP and Manchester council officers to work with this premises licence holder, however he clearly has not cooperated whatsoever”.