Dad issues desperate plea after daughter, 15, is left ‘scarred for life’ by cup full of coins thrown by Liverpool fans

The young Manchester City fan had her head glued. 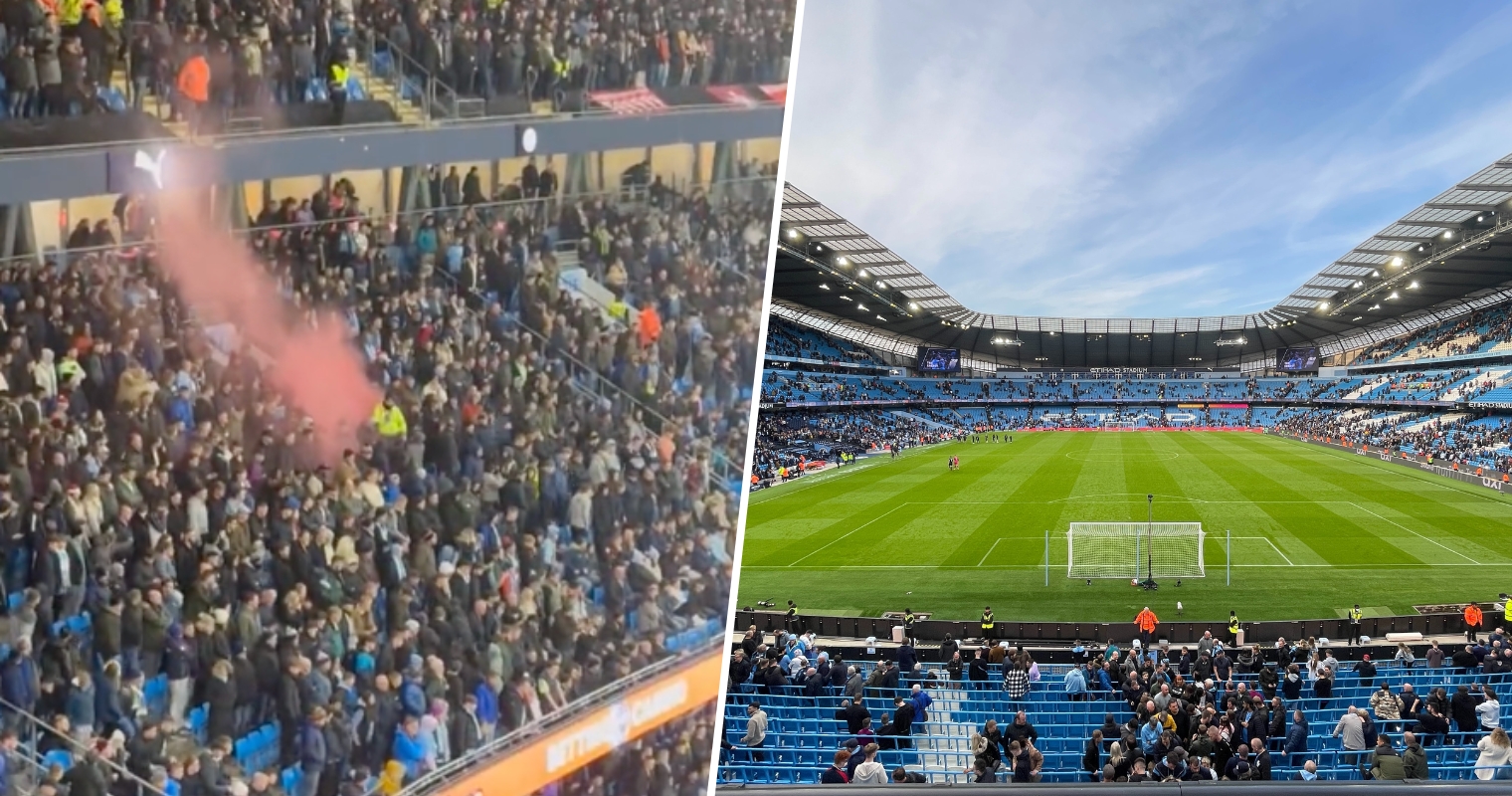 A father has issued a plea and police are investigating after a heavy cup filled with coins was thrown by Liverpool fans from the stands at the Etihad Stadium on 22 December.

The ‘horrible’ incident saw the vessel launched from the section of the stands housing the Liverpool FC fans and was thrown down into the assembled Manchester City supporters.

The ‘weighted pint pot’ hit a 15-year-old girl who was watching the Carabao Cup match on 22 December, leaving her ‘scarred for life’.

The young City fan had to receive first aid inside the ground for a head injury, which ended up needing to be glued during treatment.

Her dad is now desperate for anyone with information to come forward to the police so they can press charges against the person(s) who injured his daughter.

He praised the kindness of many Liverpool fans who have reached out after his posts on social media, and added that he’s been contacted directly by Liverpool FC CEO, Billy Hogan, who “apologised unreservedly on behalf of the club”.

The local father first went public in response to the following tweet: “Disgusting behaviour from some Liverpool fans tonight at the Etihad.

He responded to it with: “The 15-year-old was my daughter. 500+ football matches in 100+ stadia and I’ve never experienced anything like I did tonight. Horrible. Thanks to the paramedics, police and stewards that helped after the event.”

His longer statement said: “My 15-year-old daughter was hit by a weighted pint pot thrown from the ‘LFC section’ of fans at The Etihad during Manchester City vs Liverpool last Thursday.

The pot ‘smashed’ on impact, she suffered a head injury and was ‘glued’ at the ground before being released later that evening. The incident occurred about 20 mins in, just after Liverpool’s first equaliser. We think it was probably thrown from block 318 as we were directly below this block.

“We are meeting officials at Manchester City Football Club this week and are asking for any information that could help us identify the thrower. [Greater Manchester Police] took statements, are keen to pursue and will press charges if we can identify the culprit.

“…I am hoping if it’s spread far and wide a memory may be jogged somewhere. There were in excess of 50,000 people present.

“If you were at the match…or know someone who was. Was it near you? – Where were they located? – Do you know who it is? – Have you seen any clips on social?

“We have had a call from LFC directly (Billy Hogan) who apologised unreservedly on behalf of the club and I would like to stress they are as committed as we are to rooting this individual out of football and for them to face the consequences of their actions.

“Please don’t come at me with whataboutery. I completely condemn any incidents of violence from any football fans and any offensive chanting by fans of either side. She is a 15-year-old who was enjoying watching her team with the rest of her family and she is now scarred for life.

“I would like to thank the dozens of Liverpool Football Club fans who have contacted us so far with kind messages of support in finding the perpetrator and also all friends and contacts who have been in touch.

“I am a Dad seeking justice for his injured daughter, that is all. All information gratefully received.”

In a joint statement from Liverpool and City, the clubs said: “Liverpool FC, Manchester City FC and the chairs from our supporter groups have worked together in recent weeks to remind fans of our expectations and both clubs would like to thank the vast majority of fans for their behaviour at last night’s Carabao Cup match at the Etihad Stadium.

“It is however hugely disappointing that there were a number of incidents during last night’s match that are wholly unacceptable. These incidents will be fully investigated, reported to police and the individuals who are found to be responsible will be subject to the sanction process of their respective clubs.

“Liverpool FC and Manchester City FC are fully committed to working together to eradicate these issues from our fixtures. They have no place in football.”

Greater Manchester Police is investigating a ‘number of incidents’ that occurred during and after the match on 22 December.

GMP’s match commander, Superintendent Gareth Parkin, said: “We are aware of a number of objects, including coins and a smoke bomb, that were thrown during the match. We will be investigating the incidents and reviewing CCTV from the night.

“Clearly throwing objects in a confined area can be dangerous, and have serious and sometimes devastating consequences – GMP sends it’s thoughts and wishes to the girl who was injured and wish her a speedy recovery.”

GMP outlined the other incidents, which included two men being arrested on suspicion of trying to take a pyrotechnic into the ground and a male arrested for a racially aggravated public order offence. All three will be interviewed at a later date.

A 53-year-old man was also assaulted after the game at the junction of Ashton New Road and Alan Turing Way. He was treated at the scene and required hospital treatment.

Anyone with information about any of the incidents should contact the police.