Mayfield Park has been more than six years in the making, and it's shaping up to be a "stunning, accessible, and varied" green space. 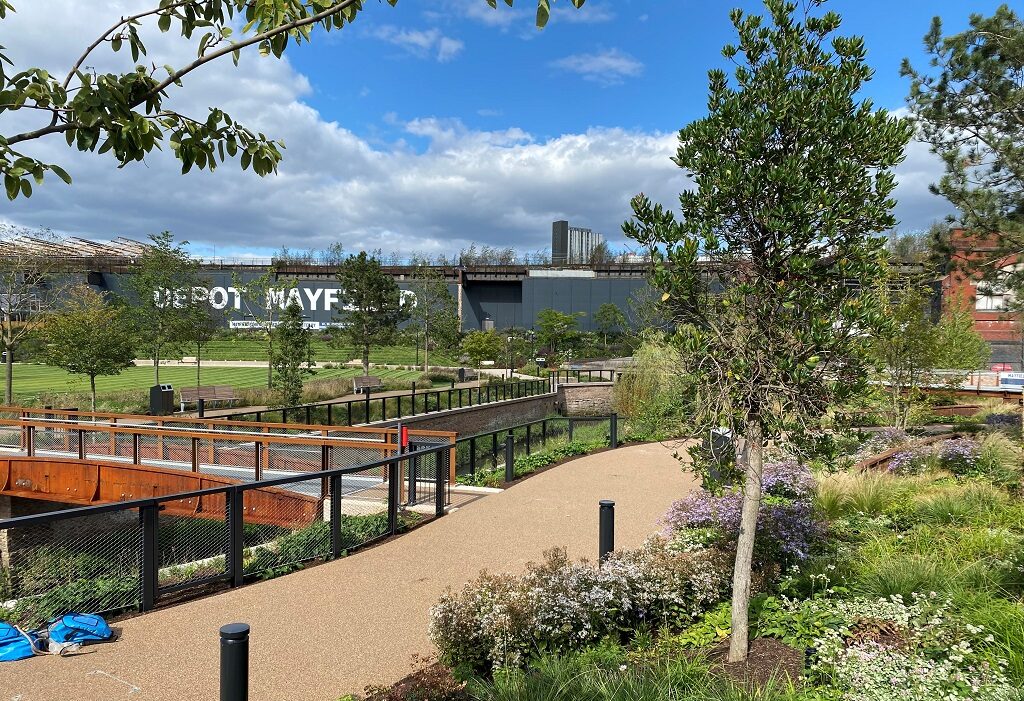 Manchester‘s first new park in the heart of the city centre for more than 100 years is officially set to open to the public this week.

It’s been a long journey to get here, but Mayfield Park is finally becoming a reality.

Over the last 18 months, the vast and mostly-derelict former industrial site next to Piccadilly Station has been transformed into what project developers are calling a “stunning, accessible, and varied” green space for everyone who visits the city centre to enjoy.

Mayfield Park has been more than six years in the planning, design, and delivery, and once it officially opens this week, local residents, visitors, and communities across the region will have access to a green oasis and beautifully-landscaped river walkways.

The realisation of the ambitious project comes after the UK government pledged £23 million of investment from its Getting Building Fund to Mayfield Park – which is one of the largest investments in any single project.

Delivered through Greater Manchester Combined Authority (GMCA), developers say this investment is part of the government’s strategy to support “shovel ready schemes” that will help to drive economic recovery following the COVID-19 pandemic.

Mayfield Park’s main entrance on Baring Street will officially be opened to the public at 12:30pm this Thursday 22 September by Leader of Manchester City Council, Bev Craig.

From then on, it will be open from dawn until dusk, seven days a week.

“September 22 is a momentous day for Mayfield, and Manchester,” said Martyn Evans – the Creative Director at U+I, which is the regeneration company leading the Mayfield development on behalf of the Mayfield Partnership.

“The greatest cities in the world offer a true blend of amazing culture, great architecture and green space.

“Manchester is one such city and Mayfield Park adds a significant piece of new, family-friendly, inclusive green space to the city centre.”

Ahead of the ribbon-cutting grand opening ceremony this Thursday, Cllr Bev Craig – Leader of Manchester City Council – commented: “There are some projects that feel so momentous in the development story of our city that we look forward to them with great anticipation [and] Mayfield Park is one of those developments.

“A project that has true transformational potential for this part of our city.

“It’s with excitement then that we can look ahead to the official opening of the city centre’s first public park in 100 years later this week.

She continued: “The partnership has shopped local when procuring contractors to make sure that employment opportunities have benefited local companies and local people first.

“During the ongoing cost-of-living crisis, it’s this type of development that provides the jobs that our residents need.

“And it makes sure Manchester people continue to share in the success of our city.”