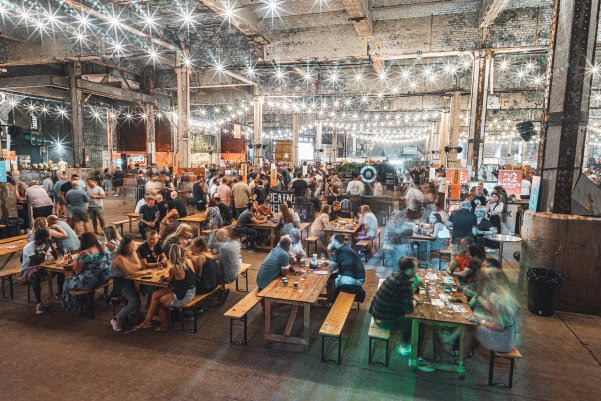 The Manchester craft beer festival will return to Mayfield Depot this summer, bringing with it hundreds of different brews from across the globe.

Following a successful debut last summer, the festival will take residence in the former warehouse this summer – taking place across Friday 22 and Saturday 23 July.

Bringing together great music, beer and street food under one roof, the festival will take place across three sessions: 6pm-11pm on Friday, 11:30-4:30pm Saturday and 6pm-11pm Saturday.

With a line-up of world-class breweries, beer fans will be able to sample everything from sours to IPA’s, lagers to imperial stouts at this year’s event.

Run by the team behind Bigfoot Festival, music will come from the likes of UK jungle legend Goldie, soundsystem and radio DJ Norman Jay MBE, and electronic musician and composer David Holmes.

For £55 a ticket, guests will have access to unlimited beer throughout their chosen five-hour session. On top of that, they’ll also be given a special festival beer glass to take home and access to the festival’s pop-up street food kitchens.

Manchester breweries Manchester Union Lager, Black Jack, Track, Marble, Pomona Island and Beatnikz will all be in attendance, as well a host of top-tier breweries from further afield.

And for those who are after something other than beer, there’ll also be stalls from Tappd Cocktails, Jim & Tonic and Ascension Cider.

The festival will also play host to the North West’s finest chefs, restaurants and popups taking stalls for the weekend – including a brand-new fire-pit cooking concept, which will see guest chefs take turns to serve up their own BBQ takes.

Speaking on the festival’s return, co-founder of We Are Beer, Greg Wells said: “After such a warm welcome last year, it was no question whether we’d return to Manchester.

“The city is home to many incredible breweries so it’s great to be able to bring everyone together to celebrate their contribution to the craft beer community!

“As well as local legends and newcomers, we’re excited to showcase international favourites and breweries from all over the UK.

“There’s really going to be something for everyone – beer lovers and even non-beer lovers, foodies, music heads, for those wanting a learning experience or simply a memorable night out! We’re very excited to be back.”