Piccadilly East is on the way to becoming one of Manchester’s coolest new neighbourhoods, but the once little-known corner of the city has a fascinating hidden history.

Like Castlefield, the Northern Quarter and Ancoats before it, the district – set between Piccadilly Station and Great Ancoats Street – is making waves as one of the up-and-coming places to live for people wanting to get ahead of the property curve.

The team behind Ramona and The Firehouse recently revealed plans to transform Piccadilly East’s Diecast building into a massive beer hall and night market, alongside creative workspaces and gardens.

This spring will also see the opening of the striking Leonardo Hotel – the brand’s first spot in the city, with bar, restaurant and wellness spaces.

Add to that plans for more homes, pocket parks and community events and a proper buzz is building, with Piccadilly East being named by The Times as one of the ‘next great places to live’.

But those calling it home will be the latest in a rich and colourful history. From rival gangs and gritty industrial slums, to a former life as a red light district, the streets echo with the stories of the past.

It might seem mad today, but most of the area surrounding Crusader Mill on Chapeltown Street was slum housing and back-to-back terraces.

Sometimes nicknamed The Dardanelles or, more locally, The Commune, the communities housed workers from Crusader and the surrounding mills.

The tiny houses were often home to around nine people living in poverty, including local workers, their kids and lodgers.

It’s where machinists, carters, and railway labourers rested their head after their shifts, alongside cotton spinners and reelers, tailors, packers, stay (corset) makers, and paviers who were working on the rapidly expanding city’s infrastructure.

The success of the neighbourhood played out in the local pubs, mostly lost to slum clearance. Whilst their daily life and celebration likely played out in these boozers, sadly it’s the stories of strife and sorrow that are usually logged in the history books.

The area was once rife with crime, with young boys making up the gangs of Manchester. The Scuttlers and The Quality Street Gang (the inspiration for the Thin Lizzy song ‘The Boys Are Back In Town’) ran the streets around Piccadilly East and Ancoats.

Like George Moran, described in records as ‘a rough’, who lived there in the 1890s and was part of the gang that served as the influence for TV smash series Peaky Blinders. By the time George was in trouble for scuttling it was their peak time in history, with more young people in Strangeways prison for scuttling than anything else.

Scuttling – involving groups of young men fighting – all but vanished when the slums in the area were cleared in the following decades.

Loads of colourful characters make up the very human history of the neighbourhood.

Tales like that of Elizabeth White, who lived on Travis Street. She met a man – George Craven – that summer in Blackpool, and he began lodging with her. It turned out Craven was a wanted burglar who had cut a hole in the ceiling of a jewellers so he could wriggle in and raid the joint.

Police tracked him down to Elizabeth’s home in 1872, where he shot a Detective Rowbottom, who survived a bullet that passed straight through his wrist.

Or the likes of the McGlynns, two local performers believed to have been part of Hengler’s Grand Cirque, a circus that stood for only four years before it was demolished to make way for the Hippodrome.

The McGlynn family vanished from the records around the time the circus was demolished – some believed they went to Paris to join the era of the Moulin Rouge.

Social impact developer Capital&Centric are leading the re-birth of the neighbourhood, with projects including the restoration of the historic 200-year-old Crusader Mill into homes and the neighbouring new-build Phoenix, industrial loft apartments. Their new-build community Ferrous, featuring ground floor cafes, bars and outside event space has also just been given the go ahead.

Crusader dates back to the 1840s, when it was the home of manufacturing company Parr, Curtis and Madeley and a key cog in Manchester’s Cottonopolis past.

A huge fire destroyed much of the mill, then known as Phoenix Works, in 1861, with the weight of the machinery and the damage brought by the flames causing the floors to collapse.

It was rebuilt, and by the 1920s was known as Crusader Mill, occupied by creative industries like the arts and publishing.

Thankfully, the days of slums and Scuttlers are long gone. A new chapter for the building and neighbourhood has already begun, with residents living where hundreds of people once worked.

But whilst the next era of Piccadilly East will be one buzzing with community life, the Mancunian stories that have shaped its past will always be a part of its heritage.

Visit the Crusader and Phoenix websites to find out more or call 0161 222 0204 to arrange a viewing. 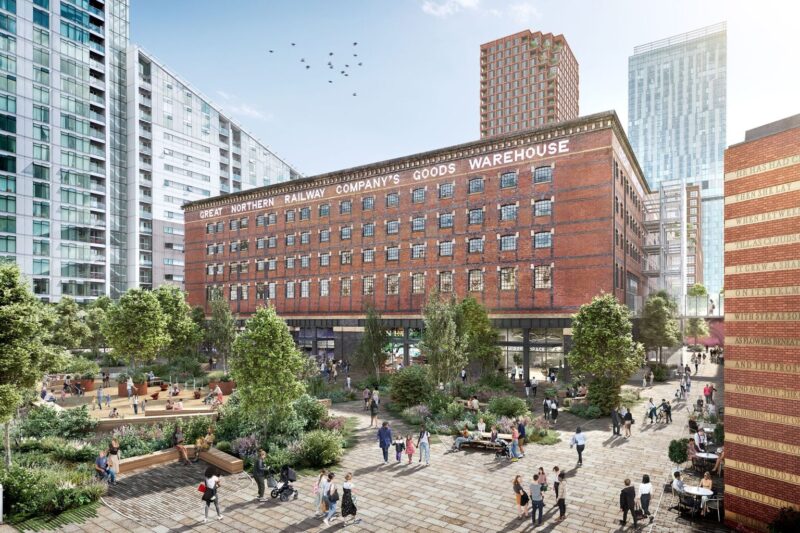