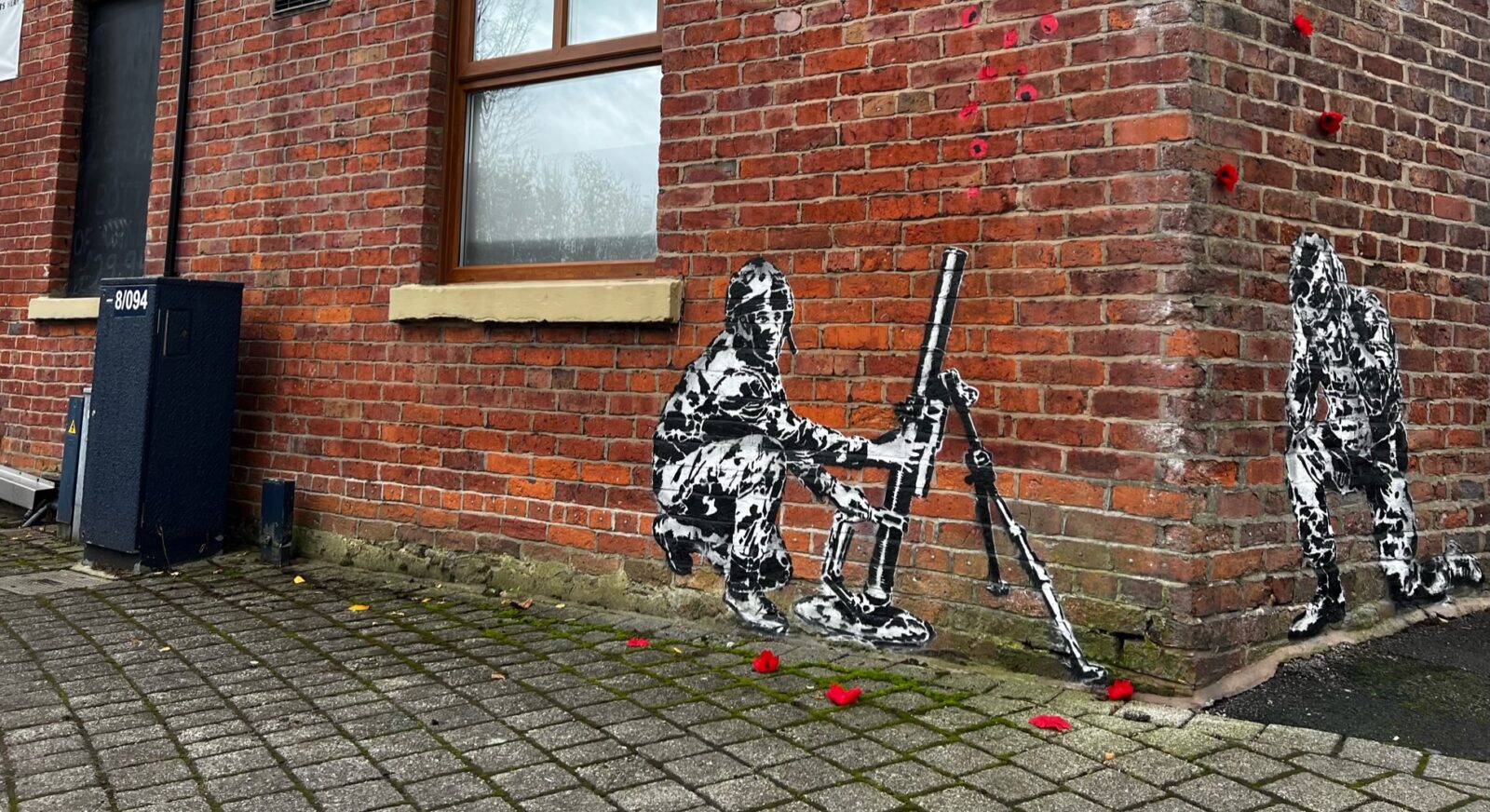 A striking new piece of street art that resembles the work of Banksy has appeared overnight on the the side wall of a pub in Tameside.

Ahead of Remembrance Day today, the landlords of the Dog and Partridge pub in Ashton-under-Lyne – which is right next to the town’s local cenotaph – woke up to notice that they had an anonymous “visitor in the night” that had painted a poignant Banksy-inspired mural on one of the outside walls to pay tribute to all the military personnel who died in the war.

The painting appears to depict two soldiers painted in black and white, with one kneeling on the ground holding his ears as the other holds a mortar.

Painted red poppies are also seen scattered up the outside wall of the pub.

“With us having the cenotaph on this side of the pub, and hundreds of people expected to pay their respects this Sunday, I think this is a very tasteful and clever tribute,” explained Scott Walker from the Dog and Partridge.

“I think this touching tribute will be a great talking point for our locals and anyone who is looking to show their respects,” he added.

Landlord Adam Wells told the MEN that he believes the mural “must have been done whilst we were in the pub on Wednesday night” and that he “doesn’t have a problem with it.”

“One of the locals mentioned about the painting outside and we hadn’t noticed it or seen anything.

“It’s a respectful memorial and I didn’t mind it, because it isn’t just some random graffiti or something like that – it’s tasteful and a nice gesture.”

“We don’t have a problem with it at all,” he added.

With dozens of people stopping to appreciate the mural after it secretly appeared, staff at the pub were initially left confused as to how the artwork got there and who was responsible for it, but it has since been revealed as the work of Mr Eggs – who is often known as ‘Manchester’s Banksy’.

The mural might not be the work of actual Banksy, but the real artist also remains anonymous and uses a pseudonym.

Salford-based artist Mr Eggs says he has “appreciated” street art for the past 15 years or so now, but has always laughed off Banksy comparisons when they’ve previously come up, saying: “It’s not like he invented spray can art.”

Sharing a picture of the artwork on social media, the Dog and Partridge said: “Looks like we’ve had a visitor in the night but what an excellent tribute to wake up to on the side of our pub.

“Great addition and just in time for this remembrance Sunday. Lest we forget…”

The picture has since amassed hundreds of interactions ahead of Remembrance Day, and has also seen many local residents comment to express their love for the artwork, as well as praise the pub for remaining so positive about the unexpected situation.