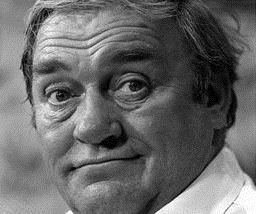 Les Dawson wasn’t like other comedians. More accurately, he was an artist.

He just happened to be riotously funny as well.

February 2 marks the birthday of one of the greatest performers that Britain has ever seen: A dexterous, sharp-witted national treasure who was taken from us too soon.

Born in Collyhurst in 1931, Dawson first caught the public eye during an appearance on Opportunity Knocks in the 1960s, quickly turning into one of the country’s most popular stage personas.

Introducing regional northern humour to the wider masses, Dawson would make the kind of jokes most people could relate to – favouring a gruff, deadpan delivery and purposely playing the wrong notes on the piano during performances, grumbling about his mistakes to the chuckling crowd.

Impeccable comic timing aside, Dawson also had a knack for slapstick – boasting a bizarre ability to pull mangled faces that sent audiences into fits of giggles (an old injury meant he could fold his jaw right up over his lip).

He created characters for his comic routines, too – teaming up with fellow comic Roy Barraclough to portray two gossipy millworkers Cissie Braithwaite and Ada Shufflebotham.

For the more risque subjects, the duo would mouth any rude words to one another – much in the same way that Lancashire women of old used to do amid the racket of the northern mills.

By the sixties, Dawson had become one of the most prevalent faces in British comedy. But he took the scenic route to reach the stage.

In his youth, he had dreams of becoming a novelist – and temporarily swapped his humble surroundings of Collyhurst to mingle with the art crowd in the illustrious French capital .

This early part of his life was portrayed in an episode of Sky Art series Urban Myths in 2020 – revealing how Dawson was ultimately waylaid during his time in Paris and found himself plonked at the seat of a piano in a local brothel.

It was here, seemingly, that Dawson found he could make punters laugh – deliberately striking incorrect keys and throwing some jokes in for good measure.

After finding his feet on the comedy circuit, Dawson would go on to enjoy long television career that included credits for Fast Friends, Blankety Blank, Sez Les and Dawson’s Weekly.

He married twice and had four children – including Charlotte who went on to become a reality TV star.

Dawson developed his first set of serious health problems in the eighties, and after awaiting medical results at Whalley Range Hospital in 1993, the comedian suddenly collapsed and died of a heart attack.

In 2008, a statue of Dawson was placed in the gardens by St Anne’s-on-Sea pier in Lancashire – where he had lived for several years.

Actor Mark Addy, who slipped into Dawson’s famous tux for the Urban Myths episode on his life, called the comedian “one of the funniest people I’ve ever seen.”

“You always felt you were in safe hands with his style of deadpan, self-deprecating humour,” he stated.

“It was suitable for all audiences.”

Wherever he went, whoever he played to, he’d often get the whole room laughing.