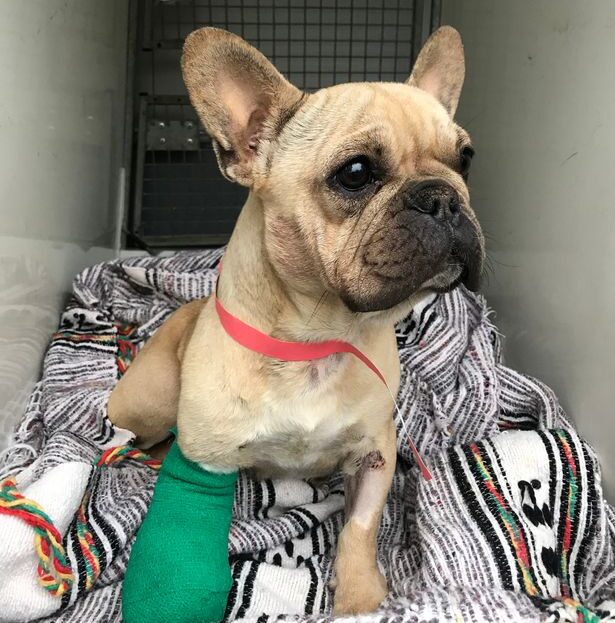 A dog stolen from her family’s home in March was found and reunited with her owners just in time for Christmas.

Minnie the French Bulldog was sadly found abandoned at the side of a canal in Liverpool Road, Hapton, near Burnley – 170 miles away from her owner Staci Day’s home in Gloucester – by a woman walking her dog, and after noticing she had some severe leg injuries, the RSPCA was thus called to help Minnie, who needed life-saving surgery to amputate her leg.

The leg wound had been bandaged, not by a trained professional, and was severely infected.

Minnie had no feeling in her severely damaged limb, and a vet decided an emergency leg amputation was needed to save the pup and provide her with the best chance for a happy life.

She was then taken to the RSPCA’s Greater Manchester Animal Hospital where she had to have her leg amputated further, and it was here that a microchip was found which revealed her owner’s details and the fact she had been reported as missing in March.

All was healed and Minnie was returned home where she immediately recognised her emotional owner and ran up to fuss her.

Owner Staci Day said: “We weren’t sure we would ever see her again when she went missing, so we are over the moon to have her back in time for Christmas.

“We reported her missing but thought she may have been involved in a road accident as there is a busy road nearby. We thought we might not ever find her, especially as time went by.”

She said the family were “shocked” to get a call from the RSPCA to say Minnie had been found.

“It is so sad she had been neglected and has lost her leg but she doesn’t seem to be letting it bother her and she is back to her playful and loving self,” she added.

The animal charity has launched an investigation following reports that a dog had been found abandoned with a severe leg injury at 11pm on 28th November.

Ryan King – Inspector at the RSPCA – has launched an investigation to find out who dumped Minnie, saying: “It was great to see such a happy ending after all Minnie has endured.

“She was so excited to see her family.

“As soon as I got her out of the van and started walking towards the house, she started pulling me as she knew where she was going. She rushed straight over to Staci with her tail wagging and jumping up at her.

“She looked so happy to be home – and was enjoying getting lots of fuss and love.

“This really does highlight why microchipping your pet is so important and it is vitally important to tell the chip company yourself if any contact details change.”

Anyone who knows about the whereabouts of Minnie during this period is encouraged to contact the RSPCA appeal line.