24-year-old Dylan Rixon is a carer at a deaf and learning disability living facility in Cheshire. 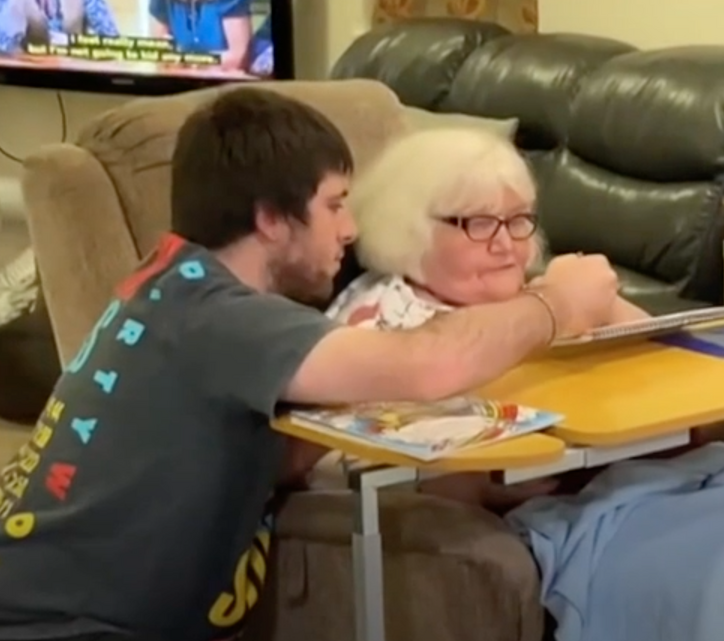 There’s no denying that the coronavirus (COVID-19) pandemic has flipped life on its head.

The first national lockdown introduced towards the end of March 2020 saw the world grind to a halt, with several industries ordered to temporarily close their doors, numerous events cancelled, all non-essential workers told to work from home, necessary social distancing measures put in place, and the public encouraged to do everything they can to “protect the NHS [and] save lives”.

But for some of us, working from home looked a little different to the rest.

For Dylan Rixon – a 24-year-old carer from Flintshire in Wales – working from home meant calling a new place home instead, as he left his hometown and country to cross the border and move into the Cheshire care facility where he works full-time.

Dylan works for the Deafness Support Network, which runs four homes caring for deaf people and those with learning disabilities 24 hours a day, and moved into Stepping Stones in Northwich, Cheshire, in March last year when coronavirus began to take hold of the UK.

The move has meant that Dylan has spent all but three weeks living in the care home since the pandemic began and admittedly spent his 24th birthday “just staring at four walls”, but he said his sacrifice has been the best way to keep himself and the vulnerable tenants safe.

He also said he had better insight into the lives of the home’s 22 residents as a result.

The idea to move into the care facility full-time was suggested to him by his father, as Dylan has a weak immune system as a result of contracting meningitis as a toddler, and also had a mild heart attack two years ago too.

As well as as being in the name of safety, moving into the home also had its conveniences too, as it meant Dylan could avoid the 30-mile commute on public transport each day.

Dylan said: “I remember my dad saying ‘you need to be a bit wiser about your decisions, because further down the line its going to affect everyone and be much worse than you think’

“And he was right.

“So we made the decision it was best for me, best for the family and work as well because I was reliable and always here.

“I used to get up around five-ish, get on the train for six o’clock and get here for half-past eight. Then I’d finish at nine at night and get home at one in the morning, get a few hours sleep and then come back again, so it has been a bit of a change from doing that, to now sleeping here”.

He continued: “When everyone’s going at seven at night I’m still here,

“I find myself in the kitchen cleaning or doing a bit of laundry and thinking ‘I wish I was going’, but I’m not [so] I usually watch movies or have game of Jenga”.

But despite the monotony that may go along with his adjusted lifestyle, Dylan believes he has gained a better insight into the lives of those he cares for now that he’s living under the same roof as them, adding: “I was seeing the tenants three [days’] on/three off, and now I see them every day and I’ve got to know the way they approach life, how they go about things”.

And he has no plans to leave any time soon either.

He often even finds himself joking about staying on and paying rent in rent at the home, but admits that he does miss home and hopes that it won’t be too long before he is able to see his loved ones again.

“I miss my family and friends but I’ve just been getting on with work,” said Dylan.

“I keep in contact with everyone from home and I’m sure they’re missing me like I’m missing them.

“I’ve still got Christmas presents to open and they’ve got presents coming their way when I see them again [so it’d be nice to get back to Wales one day.