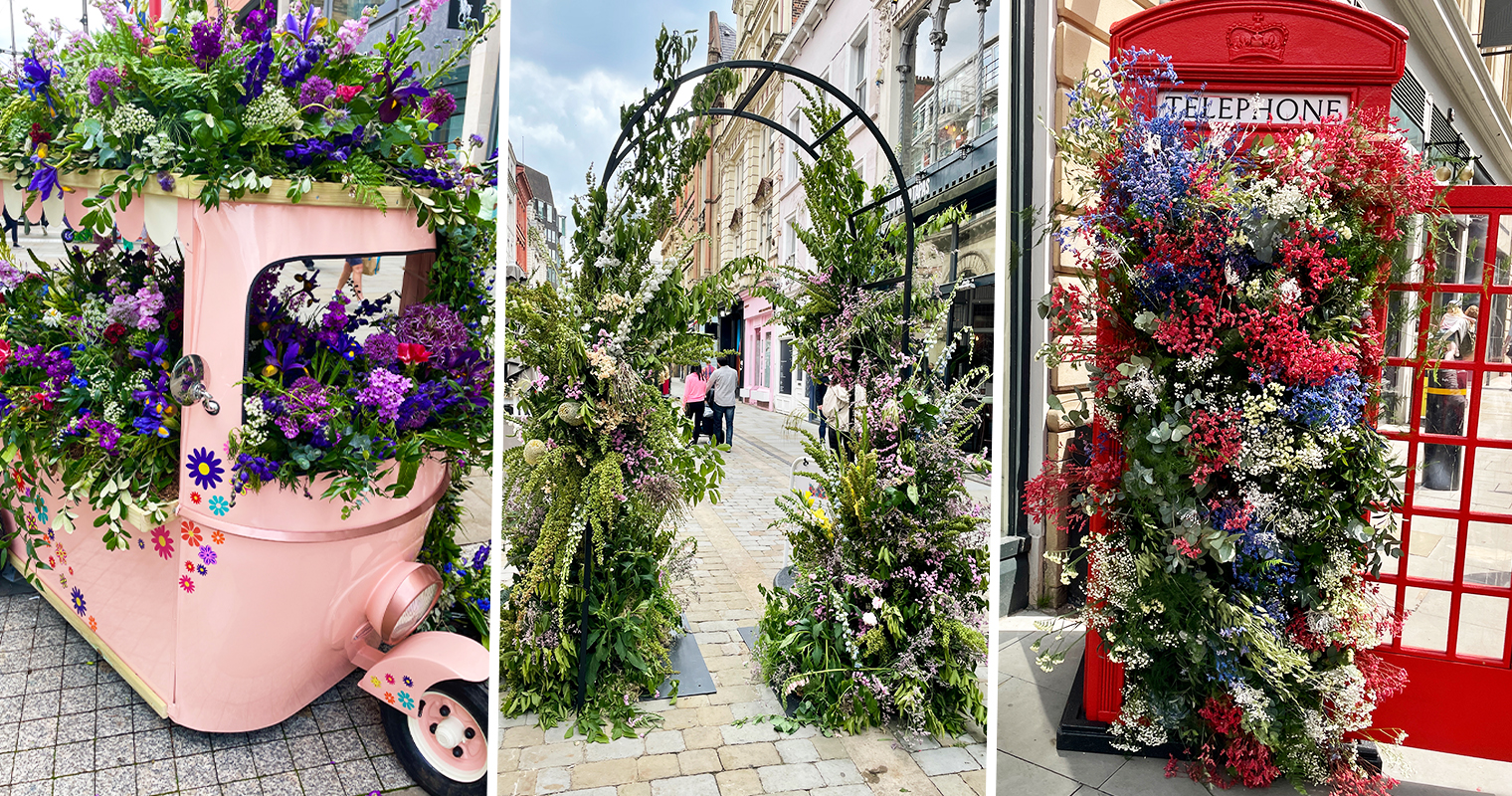 Last weekend saw one of Manchester’s most beautiful celebrations return to the city centre, as the Manchester Flower Show took place.

The huge event fills the city’s streets with flowers and plants every summer, with local businesses taking part in events and installations.

The event, which is brought to the city by Manchester BID, coincided with the Jubilee weekend this year, meaning there were four whole days for Mancs to explore the festival.

The Manchester Flower Show attracted around 70,000 extra visitors to the city centre, including a 50% increase in footfall on King Street according to figures released by Manchester BID and CityCo.

As this year’s event coincided with the Queen’s Platinum Jubilee celebrations, there were plenty of royal-themed installations for visitors to see.

A huge crown filled with blooms took centre stage in the Arndale as part of a special Jubilee Trail.

Also appearing in the shopping centre was a giant bee made from flowers, complete with a crown to mark the Queen’s landmark occasion.

Artist Sarah Hayes (or Twigtwisters) crafted a leaping horse out of twisted willow on King Street, as a nod to Her Majesty’s passion for equestrian sports.

The 10-part Jubilee Trail also featured a classic red phonebox with flowers bursting out of its door, a London-inspired Changing of the Guard display (complete with mini Trafalgar Square lions), and a colourful floral TukTuk to symbolise the Commonwealth.

At St Ann’s Square, installations included a bicycle with flowers tumbling from its basket.

Local florists also rocked up with their own stalls, including Plant Shop, Freddie’s Flowers, and Flourish.

Over on New Cathedral Street, Harvey Nichols and Manchester Gin teamed up to create a summer cocktail menu.

Their pop-up garden space included a horse box bar, lawns, and deck chairs, as well as masses of potted plants.

Selfridges also got in on the action with their Flower Show Square, complete with live music and local food traders, donating to Eat Well MCR in the process.

Then, of course, there was the cocktail trail, leading visitors around some of Manchester’s best bars to sip on specially-created drinks.

Read more: Manchester food and drink festival to give out 2,000 free pints this weekend

Jane Sharrocks, Manchester Business Improvement District Chair and General Manager of Selfridges Exchange Square said: “This year’s Manchester Flower Show was our most popular to date, bringing in tens of thousands of additional visitors to the city on a truly historic weekend.

“It’s a great example of our retail and hospitality sectors coming together to help build back the city post-pandemic and it’s wonderful to see footfall now exceeding pre-pandemic levels.

“This event has given city centre businesses a real boost and is indicative of what we hope will be a prosperous summer for our city centre.”