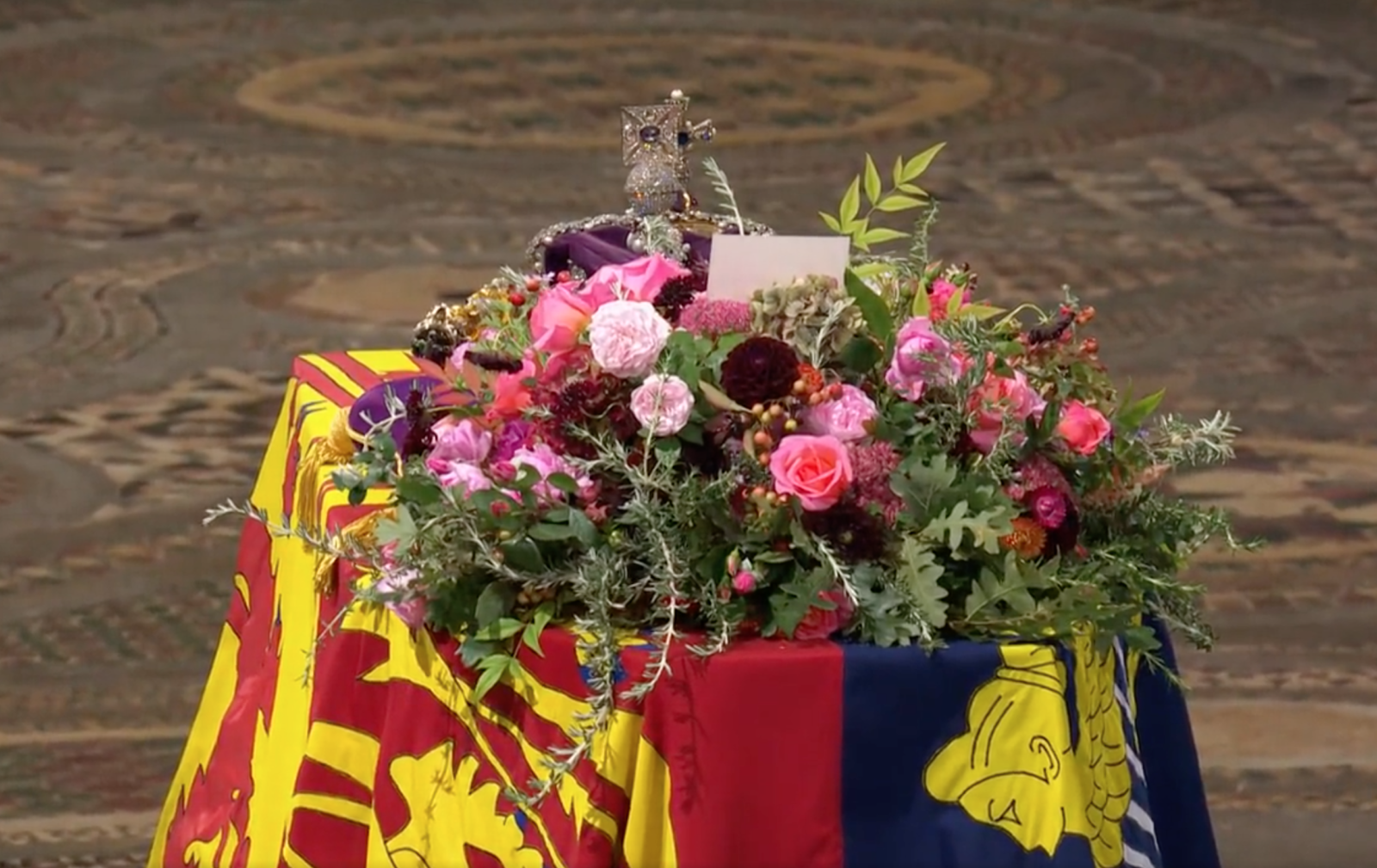 The significance of the floral arrangement on top of HM Queen Elizabeth II‘s coffin has been revealed, as well as the words written on the “loving” note placed in the centre.

The nation bid a final farewell to our longest-reigning monarch at a State Funeral today.

Around 2,000 guests attended the official service at Westminster Abbey, including world leaders representing nearly 200 countries and territories, 500 foreign dignitaries – such as politicians, civil servants, and some celebrities – and many ordinary members of the public selected for charitable or community works.

Tens of thousands of mourners also travelled to London and Windsor for the State Funeral and burial service, and many more were seen gathering at different hubs across the UK to watch the historic event in real-time.

Now, it has been revealed why the floral arrangement placed on top of the Queen’s coffin is so significant and sentimental to her and the Royal Family, as well as what the message written on the card placed within the flowers reads.

The millions of people watching the State Funeral broadcast live will have seen the colourful wreath of flowers siting on top of Her Majesty’s coffin, along with the Royal Standard flag, and the Queen’s crown, orb and sceptre.

The wreath was made completely sustainably, upon King Charles III’s request.

The Royal Family has revealed that, also upon the King’s request, the floral wreath includes myrtle flowers which have been grown from a sprig of the Queen’s wedding bouquet when she married Prince Philip The Duke of Edinburgh back in 1947.

The wreath also features foliage of rosemary, which is an ancient symbol of remembrance, and English Oak, which is a national symbol of strength.

Flowers cut from the gardens of the Balmoral estate – the Scottish castle where the Queen spent much of her time including her final days before her passing – also feature prominently in the arrangement, and these include the Queen’s favourite flower, the sweet pea, as well as dahlias, phlox, white heather, and pine fir.

Many of these floral tributes also hold a poignant tribute to the Queen’s relationship with her late husband.

Dahlia flowers symbolise a lasting bond and lifelong commitment between two people, while sweet peas are associated with departures and goodbyes, as well as being the birth flower of April – which was the Queen’s birth month.

Typical of many floral arrangements at funeral services, many spectators also noticed that there was a card with a tribute message was placed in the centre of the wreath, and the message written on the note has now been revealed and shared by the BBC on the live television broadcast.

The message on the note card was from King Charles III, and was said to simply read – “In loving and devoted memory, Charles R.”

Admired for her duty and dedication to the role, today her remarkable life was remembered by all.