He scores, assists... and also dives. 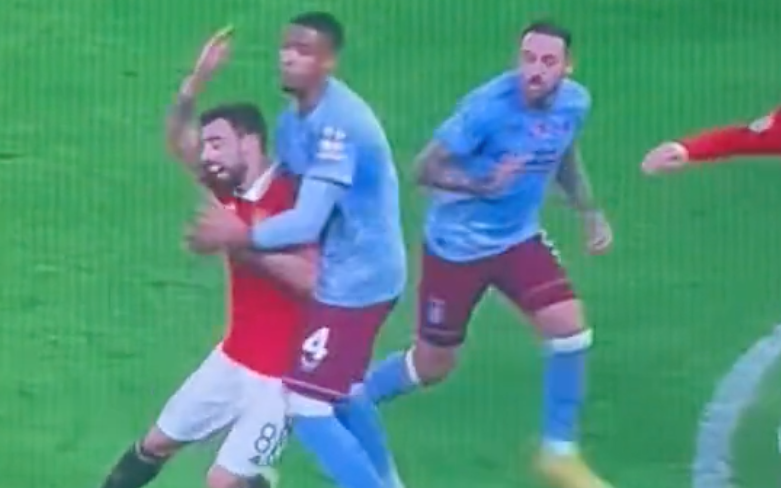 Manchester United might have gotten their revenge over Aston Villa with their 4-2 win on Thursday night, but not without one player once again winding up a fair few fans online.

Bruno Fernandes has been one of the most important players for United since he arrived at the club back in January 2020, enjoying an utterly ridiculous debut season for stats and having played a key creative role ever since.

However, while he scored on the night and helped the Reds come back from a goal down on two occasions with his deflected finish, assist and all-round his chance creation, arguably his biggest moment in the game came when he decided to collapse into defender Ezri Konsa.

Even for Bruno, this is pretty ridiculous. Social media certainly seemed to agree, anyway.

One of his finest performances to date. Academy Award’s in the post.

Even among many United fans, Bruno’s diving and fairly regular on-pitch antics have become a source of frustration, so you can only imagine how it’s received by fans of other teams.

Reacting to a lengthy post on the r/soccer subreddit, fans branded his latest dive as “classic Bruno” and “absolutely laughable, some even went so far as to label him a “little rat” and “the whiniest c*** in the league”. Tell us how you really feel.

Despite his impressive performance in the second-half turnaround, the truth is that this kind of sh*thousery is just part and parcel of Fernandes’ game and, much to the annoyance of other teams and fans, often yields results.

Either way, thanks to goals from Fernandes, Marcus Rashford, Scott McTominay and an equaliser from Anthony Martial on his comeback, United were back to winning ways after having been turned over by Villa 3-1 just days before.

There was also another appearance by Alejandro Garnacho, who managed to grab two assists and the man of the match award in just over half an hour on the pitch.

The youngster is one of the hottest prospects at the club and fans have been crying out to see more of him. It’s clear to see why. Bruno himself has already explained that Garnacho’s “attitude” back in pre-season was one of the main reasons he’s been made to wait.

The Red Devils are now through to the fourth round of the Carabao Cup and still have eight wins in their last 11 games, not to mention are sitting fifth in the Premier League with a game in hand on the two teams above them.