The opposition supporter has not yet been identified. 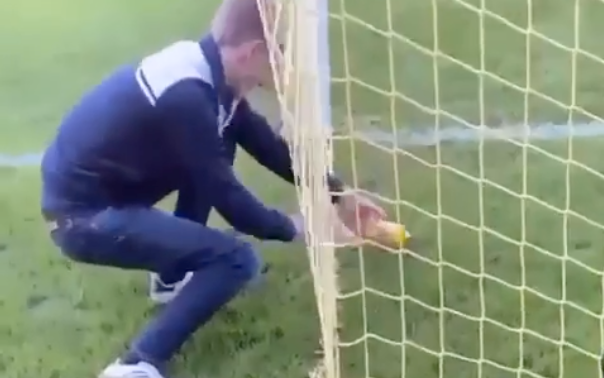 A Guiseley FC fan was caught urinating in the bottle of the Warrington Town FC goalkeeper during a match between the two sides this weekend.

CCTV and Snapchat footage shared on social media verified the incident which occurred on Saturday, 19 November at the Cheshire club’s Cantilever Park.

The video below shows the opposition fan jumping onto the pitch and swapping the Warrington Town keeper’s bottle with another which he is said to have urinated in.

The clip has been labelled by hundreds online as “grim”, “vile” and “disgusting”.

As visiting team Guiseley confirmed in the above statement, they “unreservedly condemn this disgraceful action” and reassured that this does not alight with their “family-friendly football club” value, nor does it reflect their “core of regular and committed travelling supporters.

The West Yorkshire side went on to say that while they are investigating the incident, they do not currently have any information regarding the identity of the individual in question.

As for Warrington Town FC goalkeeper Tony Thompson, he said:”Today I fell out of love with the GAME!” He went on to add that he was told he could not react to the unruly supporter because was a player. He described the entire altercation as “outrageous”.

Much to Thompson’s disappointment, he was ultimately sent off in their 1-0 defeat after he responded by spraying the bottle back in the fan‘s direction.

The veteran Warrington Town keeper reiterated that the unidentified male’s actions go far beyond verbal abuse, declaring that he put “me and my family’s health at risk and [has] knocked me sick.”

Warrington are yet to issue an official statement regarding the incident but will be working alongside Guiseley AFC to find the culprit and serve him a lifetime ban for all future fixtures of both teams.