And the site has been transformed into a cosy winter wonder-village. 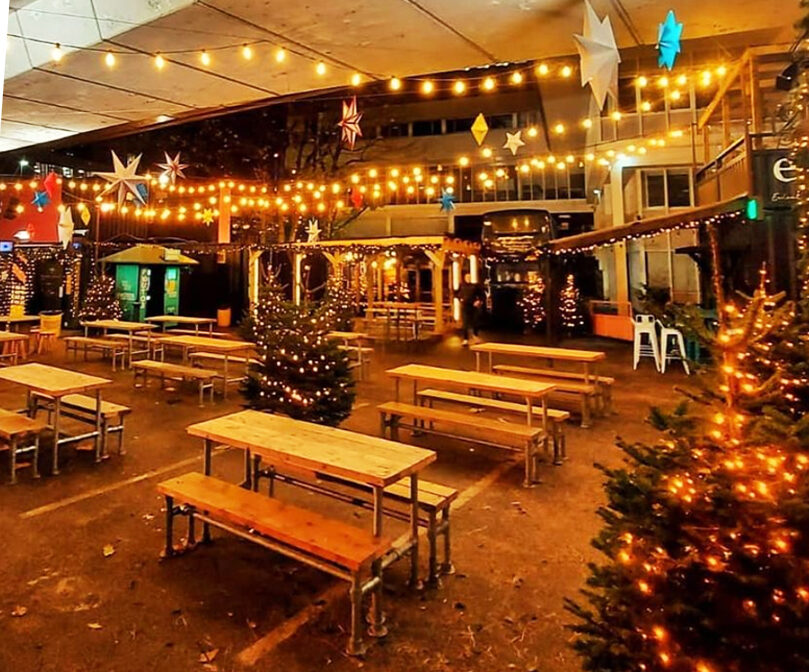 As England’s second national lockdown comes to an end, and Greater Manchester enters into Tier 3 restrictions as part of the UK government’s new “tougher” three tiered regional system, Hatch will be bringing an alternative festive shopping experience to the city centre with all of the neighbourhood’s excellent local and independent businesses opening their doors ahead of the festive period.

The site has been transformed from urban summer escape, to cosy winter wonder-village and offers a unique, twinkly and festive shopping experience nestled underneath Mancunian Way.

Hatch will be open on Tuesdays – Saturdays from 12-8pm.

And independent street food will be on the menu too, with a slimmed-down Tier 3 collection of traders opening for takeaway, including inventive sandwiches by Ate Days a Week, Asian street food by Fuku, fabulous takeaway wine by Vin-Yard, Sicilian street food by Tarricrii, vegan dishes from Herbivorous, Vietnamese street food from Hanoi 75, and Cyprian cuisine from Mezze.

All takeaway food can be ordered and collected here.

The rest of the Hatch crew is gearing up to be back after the next regional tiered review, when it is hoped that the whole destination will reopen for the full Hatch experience.

As Manchester strives to get Christmas back on track, the Hatch teams are encouraging everyone to shop local this festive season and reward loved ones with something unique and extra-special under the tree by supporting local businesses at the same time.

With Small Business Saturday coming up this weekend – Saturday 5th December – Hatch is also set to reward customers shopping from any of the destination’s indie traders by handing out Hatch gift vouchers as spot prizes.

The vouchers will be assigned completely at random throughout the course of the day, with £100 worth given away, and all shoppers need to do to be in with a chance of winning a voucher is to buy local and independent at Hatch on Saturday.

Hatch is also proud to be part of the 50 Windows of Creativity trail, with a mural by Caroline Dowsett having taken over one of the units.

Speaking on the reopening of Hatch MCR, Andrea George – Director of Retail at Bruntwood Works – said: “Hatch has been transformed into a gorgeous, cosy winter wonder village and all our retailers, hairdressers and takeaways are open and ready for the festive period.

We are open Tuesday – Saturday allowing customers plenty of time to come along and support local independent businesses in a safe environment.

“Our businesses have worked extremely hard to be able to open their doors safely within Tier 3 restrictions and we’re all looking forward to welcoming shoppers back to Hatch for Christmas shopping.”

You can find more information and COVID-safe procedures ahead of your visit via the Hatch MCR website here.

An American tourist’s chaotic trip to Manchester has gone viral after he documented the whole thing in a TikTok vlog.

Adeib El Masri, a successful LA-based photographer and TikToker with more than a million followers, said that our city was like ‘a different world’.

He has previously been documenting his experiences of visiting London, including several vlogs about the British weather.

Over the course of two days spent up north, Adeib appeared baffled by the concepts of queueing, fairgrounds, and people being nice to each other.

His pair of heart-warming videos have amassed more than half-a-million views at the time of writing.

In the first instalment, Adeib films himself at Manchester Piccadilly, saying: “I’m in Manchester. It looks kind of the same except all the buses are free apparently.”

From his taxi, he adds: “Everyone is so much nicer here, I can already tell.”

He then takes a trip to ‘Trafford Mall’, where his visit to the cruise ship-inspired food court The Orient prompts him to say: “This mall has the most Vegas vibes ever. Like ever.”

On his second TikTok vlog, he praises Manchester for being ‘so pretty’ while walking through Chinatown, and says we have our ‘own Big Ben’ in the Kimpton Clocktower.

Adeib and his friends tried to go for afternoon tea at an undisclosed location, but were turned away for not booking 24 hours in advance (‘very pretentious’, he says) and end up visiting a local Costa instead.

He then documents his trip to a fairground, where everything about the experience seems to delight and confuse him.

He says: “So guess who’s at a carnival! So it’s not a carnival, it’s a parking lot.

“Moral of the story, check where the funfair is, it could be a parking lot that isn’t a real funfair.”

Fairground disappointment aside, he does concede: “You know what, Manny is a 10 out of 10, d’you know what I mean.”

He later says, on a visit to Dog Bowl: “To save the day I decided to go bowling. Bowling is not available. It’s fine,” before heading to Nando’s.

Once safely back in London, he updated his followers with this: “Manchester was like a different world. Everyone is much nicer, like genuinely out-of-their-way nice, which is bizarre.

“Literally nothing went right in Manchester. I was there for like a day and a half, I almost got deported. Let’s just not get into it.

“Will I be returning? Probably not.”