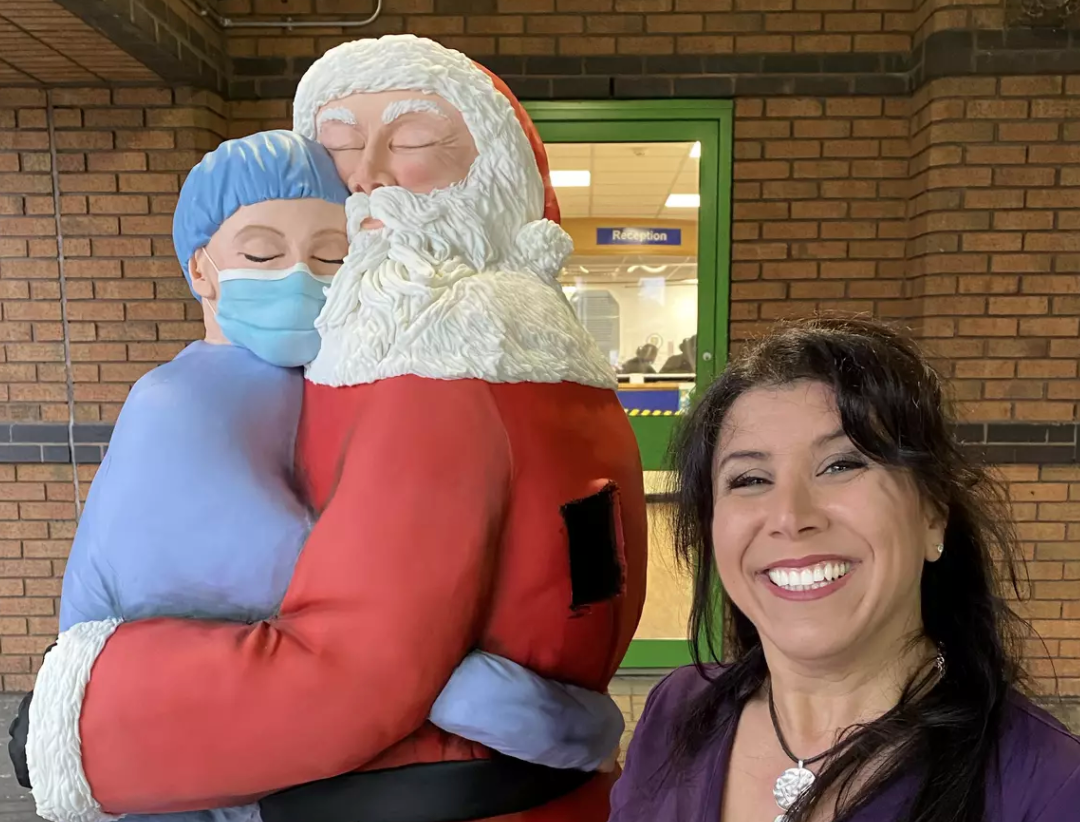 A woman from Manchester has baked a massive 6ft cake depicting a nurse hugging Santa to thank NHS staff for their work on the frontlines during the coronavirus (COVID-19) pandemic.

And the creation has since been seen by tens of thousands of people online over the past weekend.

Rosie Dummer, 53, spent two weeks painstakingly preparing the incredible cake – which served up 1,200 portions and weighed in at more than 30 stone – after she was asked to create it for Channel 5’s Amazing Cakes and Bakes, which will air later this month.

The mum-of-four said she completed the cake in “record time” after spending up to 16 hours a day moulding, crafting and sculpting it.

The 6ft tall creation is titled ‘A Hug for Christmas’.

The chocolate cake – which features a life-size Santa sharing a wholesome embrace with a nurse dressed in full PPE – is soaked in orange syrup, with each of its 17 layers boasting a chocolate orange frosting.

The impressive creation was then presented to NHS workers at the Royal Bolton Hospital on 4th December, and went on to feed 1,200 members of staff.

Giving an insight into the process of creating the impressive cake, Rosie Drummer said: “This year has been such a strange and difficult year for everyone, but the NHS staff have been absolute heroes through it all.

“We all used to clap on Thursdays and in the last few months we’ve all been trying to get back to some sort of normality, but they’ve still been saving lives on the front line.

“They haven’t stopped and I feel like it’s important to remind ourselves of all they’ve done and to thank them.

“I’m thrilled it made people feel emotional – we titled it ‘A Hug for Christmas’ and I think this applies to everyone. I think we all need a big hug.

“It was my mum’s birthday on Saturday, and I just started thinking about how lovely it would be to hug her. I think we all feel a little bit helpless sometimes, because we can’t directly help these nurses or hospital staff, but I want to help in the only way I know how – with some time and a bit of icing.

“I just want to say thank you.”

Rosie – who only started baking after she left the army, where she was the first female helicopter pilot in the British military – said this cake was the trickiest she’s attempted so far.

It even left her working until 4am on some nights.

Andy Ennis – Chief Operating Officer at Bolton NHS Foundation Trust – added: “We were delighted with Rosie’s kind gesture. It has put such a smile on people’s faces after what has been a tough year for our staff.

“The cake was absolutely incredible, and also very tasty,

You can catch the cake featured on a Christmas episode of Amazing Cakes and Bakes on Channel 5 on Saturday 12th December.