It was a sunny day in June when the face of Manchester was changed forever by the IRA bomb that tore the city centre apart.

A 90-minute warning about the lorry bomb, made with a phone call from the IRA, led to a massive evacuation effort of some 75,000 people.

Miraculously, no one died – but the attack deliberately targeted Manchester’s economy and, in today’s money, caused £1.3 billion-worth of damage.

Previously unseen footage given to The Manc and shared below shows just how widespread the impact was, with ceiling panels hanging down in the Arndale, road signs knocked askew, and windows shattered.

While the scars left on the city by the atrocity on Saturday 15 June 1996 may have been patched over, the memories are still just as vivid for those who were in the city centre that day.

One such eye-witness is a familiar face around Manchester, and landlord of one of our most legendary pubs.

This is Gerard Ford, better known as Ged, the man behind The Millstone pub in the Northern Quarter where the karaoke blasts from morning til night.

He met with us for the latest episode of our The Manc Meets series.

Back in the 1990s, Ged was in charge of The Blob Shop, a long-lost institution on High Street that specialised in ‘cheap wine, cheap beer, and plenty of blobs’ (a mix of Australian white wine, hot water and lemon. Ged sold 6,000 a week).

When he arrived to work that day, he could never have imagined that he’d be sitting in the rubble drinking beer with police officers just hours later.

He told us: “I’ll never forget that day, because it was a beautiful day – it was all blue skies and everyone was in a great mood and all that, and then you heard all the things going on, sirens and things.

Eventually, Ged’s punters were coaxed out of their local and down the road – to another pub.

His customers were safely drinking in The Merchants on Oldham Road (now The Crafty Pig), but Ged was still standing in The Blob Shop when the IRA’s 1,500kg bomb was detonated.

“The phone happened to ring, and I was in the off-licence which is the window on High Street,” he said.

“And it blew all the panels off the wall. All the windows came in, everything came in when the bomb went off. It was unbelievable.”

After being evacuated, one of Ged’s employees told him that she’d left her purse at the Blob Shop – including her house keys.

He continued: “I knew how to get down the back streets to the Blob Shop.

“As I was crossing the road I heard the police shout ‘There’s a bloke!’ and they chased after me.”

Ged was quickly emptying the cash from the tills and fetching his friend’s purse when the police rushed through the open doors after him.

“I put my hands up and said ‘I’m the manager, I’ve had to go and get this girl’s purse and I’ve just got to take all my cash downstairs and put it in the safe. I’ve got to do all these things.’

“I was [shaking with] adrenaline and so were the policemen, so I said to them ‘Well while we’re here, let’s have a pint!’

“And I promise, and this is the God’s gospel truth, we all had three pints each, just like that.

“They were great policemen.

“So then obviously they got me out of the Blob Shop and they had to walk me down Church Street in the middle of the street with the policemen with me, to make sure I was safe.

“All the glass was still coming out of the windows, it was still falling in from all over the place.

“When I came out with the police it was still a lovely day, obviously it was blue skies.

“Alarms for cars, alarms for all the offices. The sound of alarms all the time, it was very very eerie.

“I can’t describe it. Well, after three pints anyway! I just remember thinking ‘What the hell’s happened?'”

Ged’s Blob Shop pub was only closed for a matter of days – it was back open for business by the middle of the week after the attack.

“People are very resilient, they want to go back to normal ways and that’s what they do. 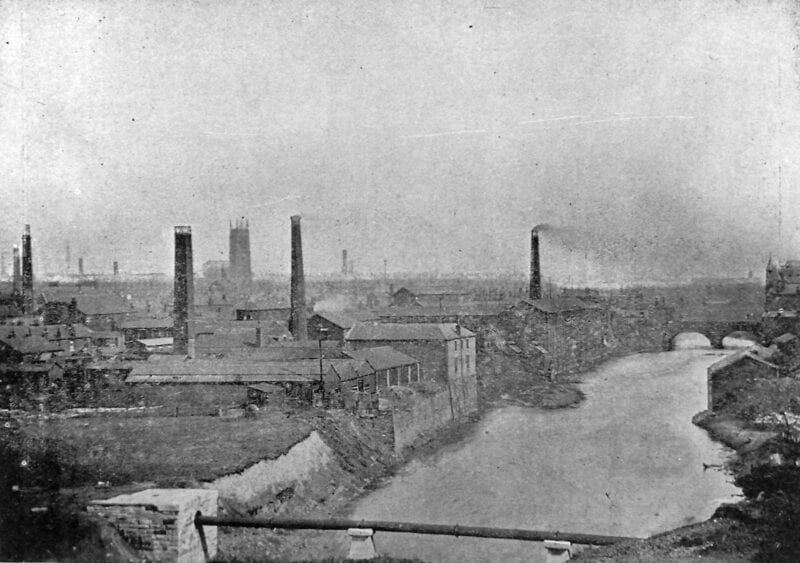 Sailing through Salford: The floods of 1852 that left the north 6ft underwater

169 years ago, on February 5, torrential rainfall in the North-West led to a number of rivers and streams in Manchester to burst their banks.
byThe Manc

All great bars, all deserving of a visit, but - dare we say it - not all exactly 'secret' or 'mysterious'.
byGeorgina Pellant

UoM maintained its highest ever position in the latest edition of the QS World University Rankings.
byThe Manc